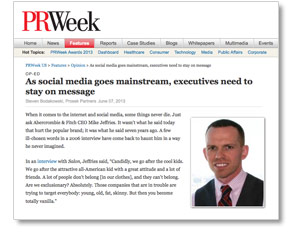 When it comes to the internet and social media, some things never die. Just ask Abercrombie & Fitch CEO Mike Jeffries. It wasn't what he said today that hurt the popular brand; it was what he said seven years ago. A few ill-chosen words in a 2006 interview have come back to haunt him in a way he never imagined.

In an interview with Salon, Jeffries said, “Candidly, we go after the cool kids. We go after the attractive all-American kid with a great attitude and a lot of friends. A lot of people don't belong [in our clothes], and they can't belong. Are we exclusionary? Absolutely. Those companies that are in trouble are trying to target everybody: young, old, fat, skinny. But then you become totally vanilla.”

Jeffries is now learning the hard way the importance of thinking and prepping before you speak. Just last month, an explosion of chatter occurred online, after Business Insider decided to reintroduce the 2006 story to the world. The article pointed out that Abercrombie does not sell XL or XXL women's clothing because it doesn't want overweight women wearing their brand. Now Change.org, a worldwide petition website, has more than 170,000 supporters encouraging Abercrombie to stock plus-size clothing, and a damaging story on Elite Daily, a website devoted to Generation Y, has attracted more than 1 million followers to the discussion.

Because social media has become even more mainstream, this brings up a valuable question: is it possible to avoid such an incident?

In Jeffries' case, words like “young,” “fat,” “old,” and “skinny” -- words that are inflammatory or potentially show bias, should have been avoided. Clearly knowing what to say and how to say it, is as important as ever.

A recent study by accounting firm Eisner Amper that polled more than 235 directors of public and private companies and nonprofits, found that 73% cited reputational risk as their most pressing concern outside of financial performance. That's up 19% from just four years ago.

This reality puts executives in a somewhat precarious position – they have to tell their brand story in a way that will not haunt them days, months, or even years down the line.

In the past, media training focused more on appearance and clothing choices; today, substance trumps style. Skilled media trainers must focus on messaging. What does the company brand stand for and what is the most enduring, concise, and entertaining way to tell that story. Is it through a compelling statistic, metaphor, or analogy? A good media trainer will help you determine that.

And what about those comments that may live forever on YouTube?

Today's trainers think in terms of maximum exposure via social media through using the fewest number of words. It's about conveying a strong, concise message that's universal and can be repurposed over and over again. The questions become irrelevant once the proper technique is mastered.

One thing is clear; the digital age has thrown a curveball at businesses that now must always have their guard up. Once an individual accepts the responsibility of leading an organization, he also accepts the reality that his words speak for the company.

Given the lasting financial and brand impact just a few words can have on a business once a message hits the digital space, executives must take the time to ensure they are always prepared. Media training with a focus on messaging is imperative. While an executive's tenure at the helm might not last forever, his words surely will.

Steven Bodakowski is an account supervisor and media trainer at New York-based Prosek Partners, where he co-founded the firm's executive media training program. Prior to his current role, Bodakowski was a TV reporter and sports anchor for an ABC affiliate in the Midwest.