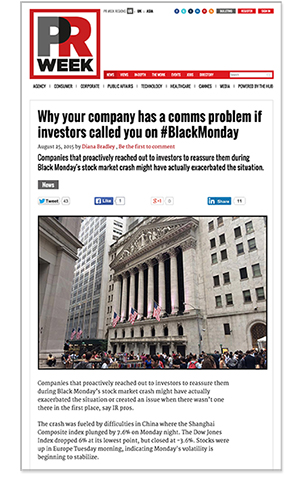 Companies that proactively reached out to investors to reassure them during Black Monday's stock market crash might have actually exacerbated the situation.

Companies that proactively reached out to investors to reassure them during Black Monday’s stock market crash might have actually exacerbated the situation or created an issue when there wasn’t one there in the first place, say IR pros.

The crash was fueled by difficulties in China where the Shanghai Composite index plunged by 7.6% on Monday night. The Dow Jones Index dropped 6% at its lowest point, but closed at -3.6%. Stocks were up in Europe Tuesday morning, indicating Monday’s volatility is beginning to stabilize.

"If there is no concern or panic from shareholders, and the company’s stock isn’t trading off more-so than the broader market is at that point, then there is no reason for you to be out there jumping up and down and saying the sky is not falling," says Brian Schaffer, head of transaction services at Prosek Partners. "Nobody asked you."

In the case of a one-day selloff, if a company quickly sends out a statement and starts panic-calling its sell-side analysts and top shareholders, and then the next day everything rebounds, it can be seen by investors as a little bit of an overreaction, Schaffer explains.

"Reacting too quickly makes investors think they need to take a closer look at the company," he continues, adding that if an organization is reaching out to media outlets during a market crash to report that everything is fine, investors might also take that to mean the opposite is true.

Apple CEO Tim Cook did, however, reach out to CNBC on Monday, emailing presenter Jim Cramer to offer reassurances about the company’s trading performance, after its shares had fallen as low as 6%.

"Companies like Apple can do that, because it is a big player with a huge following," Dix & Eaton senior MD Lisa Rose says of the company’s media relations strategy in response to the crash. "But what Apple did is not something I would recommend to a smaller manufacturing company that has not been telling its story as widely or isn’t as well known. I don’t think the media would respond well to hearing from hundreds of companies."

Hill+Knowlton Strategies SVP Peter Poulos says that in most cases, the best response to a market crash is no response at all. However, if exposure to China is an important part of a company’s business, then the company should be prepared to address that, especially if questions are raised, he adds.

"If you do have that exposure, you may need to get in front of customers and remind them that what they are seeing in the stock market is not indicative specifically of your company, rather, the broader market," explains Schaffer. "The organization should also be reiterating that its plans are in place, operations have been unaffected, and business is continuing as usual."

However, Poulos adds that it is "risky" for a company to comment on a crash beyond its own long-term strategy, explaining that some "managers are not market makers or experts on global stock markets."

Likewise, if investors do express concern, regardless of the company’s exposure to the Chinese market, it is important for the organization to reassure them of its strategy and focus on building long-term shareholder value.

However, if you already had good, ongoing communications with investors all throughout, it is likely that investors will not be concerned in the case of a market crash. This is why a crash can reiterate the importance of IR.
"A market crash isn’t the time to start communicating with your investors," says Rose.

Companies that have been out there, telling a great story, will see the payoff from their proactive, regular comms efforts, she explains.

"With long-term, ongoing communications, when something like a market crash happens, even if your share price is caught in the down draft, your investors will retain their confidence in the company, its [business] strategy, and management," Poulos adds.

A market crash can even be an IR opportunity for companies considering an IPO. James Palczynski, a partner at ICR, advises that companies waiting for an IPO should stay on top of their comms strategy during this kind of situation.

"Some companies think it might be more difficult to do an IPO and that they should take a step back from communications," he explains. "But this is an opportunity, because high quality issuers could still get deals done, and if the window was to remain open, or reopen, the situation will favor the well prepared."

If a company has been in the habit of commenting on the ups and downs of the market with employees on a regular basis, or if the downturn becomes really significant or recession-like, then a company should keep an open dialogue with staffers in this kind of situation, Rose adds.

She lauds Best Buy chairman and CEO Hubert Joly’s message to staffers, regarding the crash, in an earnings report on Tuesday.

Best Buy reported $7.9 billion in sales revenue, which is an increase of 3.9% versus Q2 2014. Joly thanked the company’s associates for their hard work and explained that, while the retailer is "cognizant of the recent financial market turbulence," the company has a positive outlook on the future.

"Joly basically said that yes, the financial market is uncomfortable at the moment, but we are still very focused on our strategy and this will not impact our plans for the future," says Rose. "It is wise for companies to share this kind of message with employees or customers, when they get questions in this kind of situation."

Starbucks CEO Howard Schultz also sent a memo to employees on Monday, reminding them to be kind to any customers who express concern about the stock market volatility.

"Our customers are likely to experience an increased level of anxiety and concern," Schultz said in the memo. "Please recognize this and – as you always have – remember that our success is not an entitlement, but something we need to earn, every day. Let's be very sensitive to the pressures our customers may be feeling, and do everything we can to individually and collectively exceed their expectations."

He added that Starbucks’ future growth plans will not be impacted by the turmoil of the financial markets.

"The sort of communications [Schultz] did and being sensitive to the needs of customers and employees is really important in a situation like this," says Marc Drechsler, SVP, head of financial communications, Ketchum.

Based off a single bad day, even as bad as yesterday was, Schaffer would advise companies against proactively communicating with employees about any concerns they might have about their 401K.

"While an employee and their personal financial planner should review an employee's selections on an annual, or perhaps even quarterly, basis, making changes based on the performance of a single day or days is not recommended," he explains. "As long as an employee is diversified in terms of investments and balanced in terms of risk, they need not do anything more than monitor their portfolio as they normally would."