I’ll tell you a secret: Even though I've been doing tech and digital tech PR for about a dozen years, until recently I was still a bit of a social networking cynic. 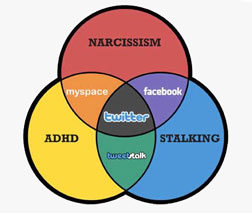 Yes, I’ll admit it. I thought Facebook was for stalkers and narcissists, Twitter a time-sucker, LinkedIn for head hunters and FourSquare just silly. It’s actually impossible to become Mayor, believe me; I’ve been trying at my local sushi restaurant and probably have mercury poisoning.

All fads soon to be pushed out by the next cool, hip thing.

Though, despite my cynicism, I've been checking in, liking, tweeting, posting, sharing, connecting, friending, following, becoming a fan and linking in with the best of them for years, which technically puts me in the category of early adopter, digital enthusiast and actually really knowledgeable on the whole thing. BUT I still wondered, does this actually (jargon alert) “move the needle?”

A cynic turned advocate -- the answer is YES. Okay, so all social media tools aren't for all businesses, products or services, but when you’re trying to efficiently reach the world at scale with your message to influence actions and behaviors, using social media tools as part of an overall PR campaign is effectiveness to the extreme. For anyone a secret cynic, think about this: