A Whopper of a Misplaced Controversy 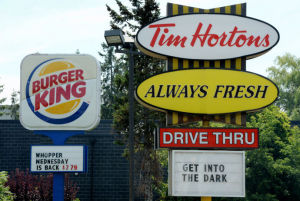 Tax inversion deals have been one of the biggest and most controversial business stories of 2014, following their strong performance as one of 2010's most mind numbing and potentially lucrative bike trip conversations. Recently, Burger King announced it would be merging with Canadian donut and coffee powerhouse Tim Horton's and reincorporating in Canada, thus making the deal an inversion.

This deal has garnered a massive amount of attention, thanks no doubt to the parties being such readily identifiable brands, much of it painting a negative picture of the deal as a tax dodge, and with some even calling for a boycott. However, these accusations are off base, and frankly a bit silly, as this deal is not only distinguishable from other inversions in terms of tax implications, but is also more shareholder friendly than many.

Critics, including the President, have lambasted these deals as "basically taking advantage of tax provisions that are technically legal," and called for legislative changes to prohibit them. While one could point out that one man's technically legal exploitation of tax provisions is another rational economic actor's perfectly legal response to a flawed tax code, the Burger King-Tim Horton's deal is demonstrably different than many recent tax inversion deals.

The majority of recent inversion deals have been in the pharmaceutical and medical device sector, where an IP-based high margin business model lends itself to significant tax savings through the use of off-shore subsidiaries (though companies that aren't household names lead to less opportunities for splashy headlines). In many of these deals' significant tax savings, and the ability to access cash held overseas without paying US taxes, appear to be their primary motivations. However, in the Burger King-Tim Horton's deal, the primary rationale seems to be accelerated international growth (and possibly an accelerated exit for Burger King's private equity owners), and Burger King doesn't have any large offshore cash hoard. While there will probably be some tax savings, they will be far less than in most other inversions. Moreover, under two proposed legislative responses to inversions, this deal would still be permissible, as the company is reincorporating in a jurisdiction where it will in fact have substantial operations revenues. For a more fulsome explanation of the above, please see this excellent BloombergView article by Matt Levine.

It is also worth noting that even if Burger King had wanted the combined company to remain domiciled in America, that may have been problematic as foreign acquisitions of Canadian firms need to pass the Foreign Investment in Canada Act's Net Benefit Test, and Canadian regulators have previously been criticized for being somewhat protectionist in such situations.

Another less often heard, though arguably more valid from a corporate governance point of view, criticism of tax inversion deals is that while they create tax benefits for the companies involved, they have adverse tax impacts for US shareholders. Burger King and Tim Horton's though have adopted a novel structure whereby shareholders may be able to defer much of their tax bill until they sell their shares, which makes this a markedly more shareholder friendly deal than many other inversions.

So, while the war of words over tax inversions may be a debate worth having, the Burger King-Tim Horton's deal probably isn't the most appropriate battle ground.

Not Such an Egg-ceptional Idea