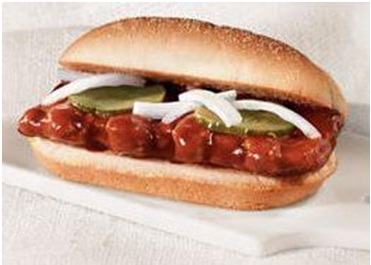 The McRib sandwich at McDonald’s is back, and while I’m no fast food junkie, news of its return sparked my curiosity. I’m not planning on running out to my local Mickey D’s and picking up a ribless rib sandwich; in fact, last time I even was in a McDonald’s, it was merely to quench my thirst with an iced tea.

What caught my interest about the McRib is the marketing strategy around it. After 16 years of being off the menu (aside from in Germany), and only sporadically available at a few select McDonald’s locations in the U.S. at any given time, McRib came back nationally in 2010 for a three-week stint, and it’s back on the menu again this year for a similar run, until November 14.

For this boneless barbecue pork sandwich on a toasted bun with onions, pickles and barbecue sauce, it seems the old saying about absence making the heart grow fonder is true. There is a cult-like following for this sandwich and even a McRib Locator for fans to report McRib sightings and find their closest sandwich.

Is the popularity of the McRib a result of the culinary greatness of the sandwich, or might it have something to do with its limited availability? This “get it while you can”, limited time offer ploy is a long-time strategy of marketers everywhere; you see it with TV offers all the time—“Call in the next ten minutes and we’ll throw in (insert snazzy promotional product here) with your purchase!” It’s the supply and demand model in practice.

And it’s not just the “As Seen on TV” crowd using this strategy. Disney has been limiting the availability of its at home movies for years with the Disney Vault, rereleasing movies to a new generation for a limited time after years of being locked away.

Disney used a similar practice last month with a limited running of The Lion King 3D in theaters before its Blu-Ray release. Even though it was a reissue, the movie earned the top spot in U.S. box office. It goes to show you that sometimes, taking something away, or limiting the availability of it, does make it more desirable and people will rush out to get it.

It is probably this success that has driven Warner Bros. to adopt a similar model with the Harry Potter films. After the release of the final film on DVD and Blu-Ray next month, Warner Bros. will stop shipping all of the movies, starting on December 29, creating an air of exclusivity around the film due to the limited supply.

This strategy works with brands like Disney, Harry Potter and McDonald’s because they have generated the loyal fan base (which I wrote about in my last blog post) with the emotional tie-in to these products (perhaps fond memories of watching The Little Mermaid while enjoying a McRib?). They have the enthusiasts who are willing to wait and clamor to the stores or restaurants to get their hands on an elusive DVD or sandwich, and it’s likely that if these products were available all the time, there would be no specialness to them and no buzz and excitement—the McRib would be just another Big Mac.

So, are you lovin’ it? Do you eagerly await the return of McRib, Starbucks’s seasonal beverages, etc. or are you annoyed you can’t get these things year-round, whenever you want them? Do you think these would be successful year-round or is it the exclusivity that makes them popular? Share your comments below—for a limited time only.

"Fragile Five" Head to the Polls