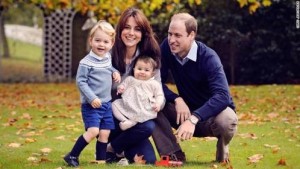 Today is apparently 'Mad Friday', one of the busiest days of the year for UK pubs and clubs. Revelers have been warned to drink responsibly. This comes after shocking statistics revealed alcohol sales across December could reach £2.3bn, and that alcohol-fueled emergences over this pre-Christmas weekend could increase by up to 50%. On your best behavior, folks!

For any of you football fans across the pond (... sorry I mean 'soccer'), there was huge news this week as the long revered Jose Mourinho, was sacked as Chelsea FC's manager. Chelsea finished eight points clear last season and won the League Cup, but have lost nine of their 16 league games so far and are 16th in the table - one point above the relegation places.

Cue the 'awhhh' sounds, a Christmas photo of the Duke and Duchess of Cambridge and their two adorable children has been released today. Looking delightfully autumnal at Kensington Palace, the photo, taken by photographer Chris Jeff, is sure to put a smile on your face.

There has been some interesting developments at the European Council today, with it being reported that EU leaders will allow the UK to deny in-word benefits to migrants. Despite these developments, Cameron still hints that an EU referendum shall be held next year.