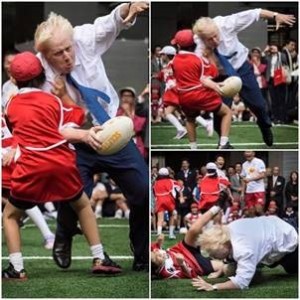 Boris Johnson, the Mayor of London got into a bit of bother this week in Japan, after deciding to play a game with some Japanese school kids. It didn't quite go to plan for the prospective Prime Minister, who in dramatic fashion ended up taking one of them out!

The British political system continues in a state of volatility and Jeremy Corbyn is doing a rather good job in creating it. As mentioned previously, Jeremy Corbyn, the leader of the left-leaning Labour party has been pushing his anti-austerity agenda and has garnered a surprising amount of support. This week, there was even a former Tory (Conservative party) voter who broke down into tears in support of Corbyn over Conservative welfare cuts, on the UK's premier political panel show - Question Time.

The plans for another shift in the UK's pension system have been revealed and it seems as though it will affect some pensions more than others. The government is lowering the total 'lifetime limit' of a fund - the amount that an individual can reap tax benefits in a pensions fund on - from £1.25mn to £1mn, meaning that those on 'Final Salary' or 'Defined Benefit' schemes could lose out on up to £15,000 a year.