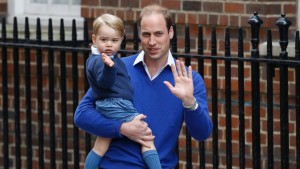 "I'm your biggest fan I'll follow you until you love me..." or not so much - it has come out this week that the Royal family are having trouble keeping the paparazzi away from two-year-old Prince George, the heir to the British throne. The Duke and Duchess of Cambridge have openly expressed their concern surrounding the media's apparent disregard for their privacy requests, as they face press invasion on a daily basis. Not ideal!

The Democrats and the GOP are not the only political parties currently locked in competitive leadership races. The vote opened today for the Labour Party's leadership election, which shall close on the 10th of September. There are four candidates in the race with Jeremy Corbyn, an unapologetic Marxist currently leading the polls by a significant margin. The party is internally divided with many arguing that Corbyn is far too left-wing to compete in the centre against the incumbent Conservatives.  Read More

In financial news, the Mayor of London Boris Johnson is planning to create a British sovereign-wealth fund to combine local public pension funds and invest billions of pounds in private equity and infrastructure projects. This "citizens' wealth fund" will be led by Edmund Truell, a private equity investor and chairman of the London Pensions Fund Authority.

And here is our favourite story this week. An elderly man who accidentally drove into a lake, was found upon rescue calmly smoking his pipe whilst his car sank to the bottom. A true Brit - the mantra, 'Keep Calm and Carry on' appears to be ingrained in his mind, body, and soul!