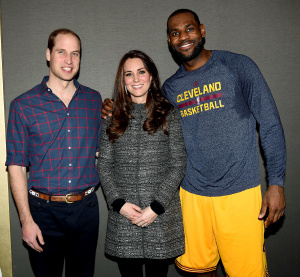 "The British are coming! ... well, in fact they have been. Everybody's favorite Brits, the Duke and Duchess of Cambridge, spent some time across the pond this week, busying themselves with numerous meals, presidential meetings, and even managing to fit in a basketball game. Lebron James is said to have broken royal protocol by placing his arm around Kate during a photograph, but fortunately the Duchess was not offended!

John Micklethwait is leaving The Economist after 27 years to join Bloomberg News as Editor-in-Chief. He'll be moving to NYC for this role, so keep your eyes peeled for his replacement in London!

Not to sound like an extra in Game of Thrones, winter is coming. The UK has been hit by what is being called a 'weather bomb' and 17,000 people have already been left without electricity. Arctic winds have entered from the north and are causing havoc across Scotland and Northern England.

Followers of politics had the pleasure of watching Britain's most controversial politician, UKIP leader, Nigel Farage, and our most politically involved, pseudo-revolutionary, A-list celebrity, Russell Brand (former husband of Katy Perry) debate it out on live television. Viewers were disappointed with the result, contending that there was a lack of engaged political debate from either side. However, we really do love our Christmas Pantomimes across here!

And, for all the animal lovers out there, a heartwarming story for the weekend—a baby Gorilla has arrived at London Zoo. Fifteen-year-old Western lowland gorilla Mjukuu gave birth early on Wednesday morning. Western lowland Gorillas are an especially endangered species and thus the zoological world is delighted to welcome this new Londoner.