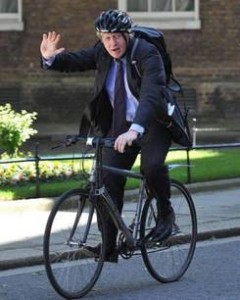 We do politics a little differently in the UK – every Wednesday lunchtime the Prime Minister stands up to face questions from both side of the house (with very few holds barred). This Wednesday, during a discussion on the National Health Service, one of the members of parliament shouted at the prime minister to ‘ask [his] mother’ about the issue (one she reportedly disagrees with the PM on). This triggered the closest thing to a political round of ‘yo momma’ that we will ever witness. And before you ask, yes parliament really is that rowdy – watch some more clips here.

The word “brexit” is hot on Blighty’s tea-sipping lips as the country considers whether the UK should stay or leave the EU. There has been a bit of a shake-up this week as Boris Johnson, London’s Mayor and the favourite for the next PM, has finally announced his opinion that we would be better out than in – the opposing opinion to the Prime minister and his party’s leader’s. For a giggle, here he is cutting Donald Trump down to size in December last year – good old Boris!

Its London Fashion week and the fashion crowds are out in force. Soho has been filled to the brim with industry leaders from all over the world, since it took over from Somerset House as the home of LFW.