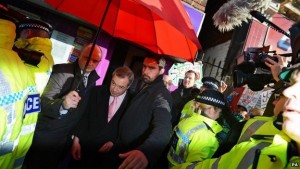 It wouldn't be Bitesize Blighty without an update on the antics of Nigel Farage. This week, the UKIP leader found himself locked in his own constituency party offices when it was surrounded by a mob of angry protesters (there are plenty of them at the minute). However, spare a thought for poor Nigel, according to the Financial Times his image as a pinstriped City gent isn't all it is made up to be... Read More

But all City slickers may soon be shaking in their boots, at least if The Green Party has anything to do with it. As the race for the General Election ramps up, an increasing amount of focus is being paid to the City of London. The Green Party is firmly on one side of the fence, it believes that "the existing banking system has failed and is no longer fit for purpose"—critics, on the other hand, argue that the Greens are making a policy out of putting the country into a permanent state of recession. Read More

Europe's great "will they, won't they" story continued this week as the Greek finance minister paid a visit to the ECB to discuss the terms of the nation's bailout package. The ECB President described the meeting as "fruitful" but as The Economist points out, there are sweet fruits and bitter ones! Read More

And finally, a sports story for once. Tonight marks the beginning of the Six Nations, a rugby competition and oh so much more besides. For those of you unfamiliar with this epic competition, The Daily Telegraph has handily put together a cheat sheet to help you through. Read More