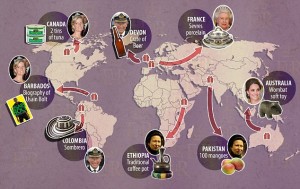 Have you ever wondered what it is like to be royalty? This week we had a brief glimpse into the life of the Queen and other royals as the royal gift list was revealed. However, it isn't necessarily as lavish as you might think—amongst the gifts given to the royals last year were mangoes, dried beef and tins of fish!

Avid readers will recall that last week we mentioned a developing "bromance" between Obama and Cameron. However, this week Nick Clegg, the leader of the Liberal Democrats, took it one step further and recalled how Obama had once greeted him with the words "It's good to see the better-looking half of the coalition"—the rivalry between the parties is clearly heating up.

Speaking of the election, comedian Al Murray announced plans this week to go head-to-head with UKIP leader, Nigel Farage, in May. Murray will stand for the Free United Kingdom Party (FUKP) on a platform of leaving the solar system by 2025 and buying Greece!

But enough politics, how about a bit of Contango, anybody? No, it is not a dance. Whilst plunging oil prices have been continuing to spook markets in 2015, some see this as a money-making opportunity known as "Contango". Luckily, for anybody not too familiar with the concept, the FT has provided a handy explanation.