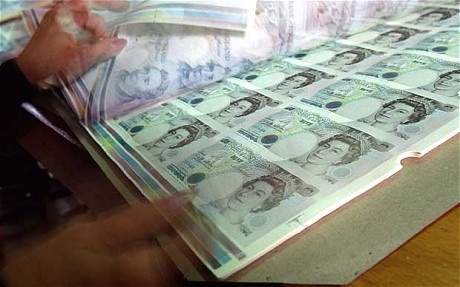 I want to start this week's Bightsize Blighty with a story: When I was a child, I remember asking my parents why the banks didn't just make more money so everybody could be richer (I was a unique brand of social capitalist). My question was quickly dismissed, however my four year old self was vindicated this week as the ECB FINALLY took my advice and announced a huge money-printing program (OK, that's not quite right, but let me have my day). Anyway, whose idea it was isn't important, particularly not to hedge fund guru Crispin Odey who likened the decision to "pushing on a string"

As the race for the 2015 General Election continues apace, plans were announced this week for TV debates that include the leaders of the seven biggest political parties. Importantly, the organizers said the debates would go ahead "regardless of whether any party leader refused to take part", and with the latest Guardian/ICM poll showing that British voters would favor "serious consequences" for any leader who ducked out, the heat is definitely on. (P.S. I'm not sure what the average Brit means by "serious consequences", but it sounds sinister). Read more

For anybody attending a party this week, bear this cautionary tale in mind: Five year old Alex Nash missed his friend's birthday party recently and found himself being invoiced by the boy's mother for non-attendance. This seemingly ridiculous story has been front page news this week and has caused huge debate about the etiquette of attending parties. Read more

The Sun's infamous Page 3 became page one news this week after The Times reported that it would no longer be printed (for those of you unfamiliar with Page 3, you can find out more here—don't worry, it is a safe link!). The group that had been campaigning for it to be banned declared victory, however this was short lived as The Sun announced on Thursday that the page was back, and hadn't ever been cancelled in the first place—oh those jokers! Read more

The Unquotables: PR, Politics and the Quote Check