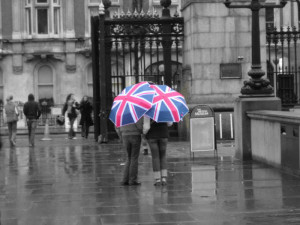 London's famous rainy weather has reared its head today, with more than one month's worth of rain predicted to fall throughout the day. You'd think we Brits would be more prepared, but in the office we seem to only have one (now communal) umbrella.

John Bercow, the Speaker in the House of Commons (the presiding officer of the lower chamber of Parliament) has come under fire today for his outrageous travel and accommodation expense. The expenses which totaled over £31,000 last year, included a claim of £983.40 for a chauffeured lift from Halifax to London—that's just over $1,500 for a journey that takes less than 3 hours by train!

This week's Greek debt crisis coverage appears to shed more positive light on the nation. The Greek government has taken crucial steps towards a bailout after its parliament passed a second set of reforms.

Obama's remarks on Wednesday encouraging the UK to remain part of the European Union, has received hostile reactions and significant criticism from a variety of Eurosceptic groups. One Conservative Member of the European Parliament (MEP) responded to Obama's statement tweeting, "Tell you what, Barack Obama, if you're so keen on the EU, why don't *you* pay to bail out the wretched euro?"

As for the celeb gossip, it is being reported that Tom Cruise is 'head-over-heels' for his British assistant. They are already thought to be planning a life of matrimonial bliss with rumors circling in Hollywood that Cruise may have popped the question already during a recent trip to Morocco.