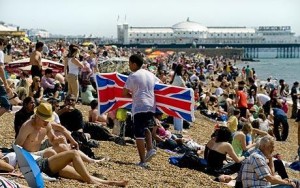 Following a wave of pension reforms earlier this year a new idea has been floated this week regarding retirement savings. The potentially revolutionary concept of a "Workplace Isa", put forward in a paper by pension expert Michael Johnson, could reshape the entire pensions market. Johnson believes this will be a popular plan with young people but could be seen as "heresy" amongst others. Read More

There has been a positive development for British Prime Minister David Cameron this week, as the cross-party consensus behind military air strikes against ISIS was bolstered by support (if a little vague) from Labour, after they said they would look "very, very seriously" at any government proposals to expand bombing beyond Iraq and into Syria.

Whilst you may be used to the soaring temperatures over the pond, some serious acclimatisation has occurred this last week for us Londoners. With temperatures reaching an unprecedented 36C (96.8F), the hottest July day ever in records caused slight chaos, particularly on the Underground. However, the temperature will be slowly dropping to allow a small respite for the weekend.

Another record breaking event this week involved the biggest antiterrorism exercise in London's history. Seen as particularly important following the tragic events in Tunisia, where around 30 of the victims were British, and also falling near the tenth anniversary of the 7/7 bombings. The Met say they are now in a better place to deal with another atrocity. Read More

Wimbledon is now in full swing and like most years, the celebrities have been swarming the event. Those seen on centre court these last few days have included Anna Wintour, Niall Horan, Drake, Seal, Douglas Booth (swoon), Kit Harrington (double swoon) and of course a few Royals, too. After Nadal's shocking exit, this year is set to be an interesting tournament.