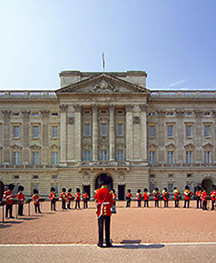 Greece has kept the top spot in the EU news this week as it once again rejected its international creditors' bailout extension proposals. The 5 month extension worth €15.3bn, was dismissed on account of its conditions being perceived as overly draconian by the Greek government. Prime Minister, Alexis Tsipras is currently on route to Athens to revise his strategy—in the meantime, all we can do is sit back, expect the worst, and hope for the best.

A document has leaked following a meeting between the European leaders, revealing that David Cameron has a "firm aim" to keep the UK in the European Union. The Prime Minister promised a referendum on whether the UK would exit the EU during his election campaign; however, it is now clear that he would rather the UK reform its relationship with it, than to exit completely.

Her Majesty the Queen may be booted out of Buckingham Palace and forced to re-locate to a less glamorous dwelling... Highly unlikely in reality, but the palace—some of which dates back to 1703—is in serious need of a refurbishment with estimated costs of to the taxpayer of £150m pounds. This has resurrected the argument of why we need the monarchy; however, her supporters argue that the Royals bring in a lot more tourist money than they spend.

Most importantly, the Oxford English Dictionary has announced four key additions to the World's most popular encyclopedia. Twerking, photobombing, twitterati, and fo'shizzle have been brought in as part of the quarterly update of 500 new entries. Good call, Fo'Shizzle.