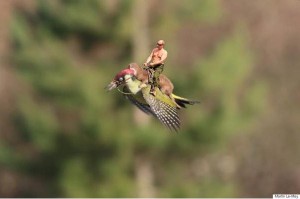 I was reminded of all the schoolyard insults from my youth this week as David Cameron was branded a wimp, a scaredy-cat and a spoilsport for refusing to take part in a pre-General Election head-to-head TV debate with the leader of the opposition, Ed Miliband. The Prime Minister has said he is happy to take part in one seven-way debate amongst all parties, but that a head-to-head is out of the question.

In economic news, Mario Draghi announced this week that the enormous stimulus package for the eurozone will begin on March 9th. In a briefing in Cyprus, Mr. Draghi appeared more optimistic about growth and less worried by deflation as he announced the purchase of €60 billion a month of sovereign and other bonds.

This week was World Book Day, but what should have been a great opportunity for kids to dress up as their favorite fairytale character turned ugly in Manchester when one 11-year-old boy arrived at school dressed as Christian Grey. The boy's exclusion from school has sparked controversy with some pointing out that characters such as James Bond—arguably a promiscuous womanizer with murderous tendencies—is a more unsuitable character. What do you think?

The country came to a standstill this week to enjoy the beauty of two animals living in harmony together...until we realised it was actually a weasel trying to kill a woodpecker. The memes that followed brought smiles back to our faces though.