With less than a week to go until the election, all parties are working flat out to try and win over the undecided votes. This week, a number of media outlets gave their endorsements with both The 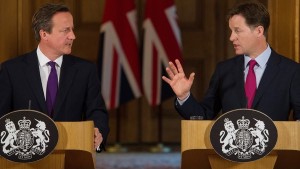 Economist and The Financial Times opting for a Conservative-led coalition. The country goes to the polls next Thursday, however, with many commentators predicting a hung parliament. It could be weeks before the next government is formed. Read More

However, the Conservatives' election campaign was not helped this week by weak GDP figures for Q1 2015. The party's campaign was also criticized for being "flat", forcing David Cameron to adopt a more passionate and energetic approach...with varying degrees of success. On Friday morning, the Prime Minister made the Freudian slip of describing the election as a "career defining" rather than "country defining" moment. Ouch. View Here

Last week's London Marathon has been the talk of the City after the Governor of The Bank of England, Mark Carney, completed the 26.2 miles in a lightning fast 3:31:22. Carney beat his high-finance rival Anthony Jenkins, CEO of Barclays, by an hour and a half.

At the time of writing, there is still no sign of the new Royal baby in what is being dubbed as The Great Kate Wait. Kate even found time this week to take Prince George swimming at Buckingham Palace. This hasn't deterred a handful of supporters from setting up camp outside of St. Mary's hospital, with some being there for over two weeks now. These "superfans" were treated to a breakfast on Tuesday courtesy of William and Kate. However, when the baby does arrive, he or she will have to wait a while before meeting Uncle Harry. The fun-loving prince traveled to Australia this week for a four-week placement with the country's defense force and was snapped ordering a Queen Victoria Burger in a local burger joint.