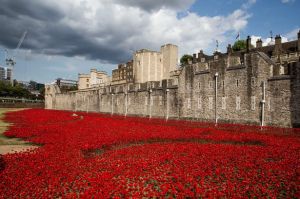 Ceremonies took place all over the country this week as the United Kingdom marked 100 years since the start of the First World War. At the 11th hour, of the 11th day, of the 11th month, the country stood in silence for two minutes to remember those that have died in conflict for our country. To commemorate the centenary, there was an installation of 888,246 ceramic poppies at the Tower of London—each to represent a British soldier killed during the First World War.

Six banks have been fined £2.6bn by UK and US regulators over traders' attempts to manipulate foreign exchange rates. HSBC, Royal Bank of Scotland, Swiss bank UBS and US banks JP Morgan Chase, Citibank and Bank of America have all been fined. A separate probe into Barclays is continuing.

For football fans, FIFA, the governing body of football (the English kind of course, none of that overdone padding in sight) has got into hot water this week. The body seems to move from scandal to scandal and the latest to engulf the organisation comes in the form of allegations that corruption was behind the selection of the host nations for the next two World Cups (in Russia and Qatar). The EU's top sports official has now waded in and urged FIFA to disclose the full findings from its investigations, a move that may be seen as a precursor to a Brussels rethink over the commercial freedoms of FIFA.

To continue with the weekly Christmas advert review, Sainsbury's (a popular British supermarket) has got itself into a bit of bother with its offering. The advert shows the famous scene on Christmas Day 1914 when both German and British soldiers reportedly played football together. A large number of commentators have thought the video to be in bad taste, attempting to capitalise on and glorify the undeniable tragedy of the First World War. You can see the video here.