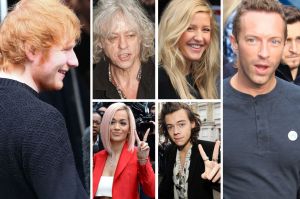 The irrepressible Bob Geldof gathered together a band of altruistic pop stars and dusted down the lyrics to "Do They Know It's Christmas?"—the hit song originally released in 1984 to raise money for victims of famine in Africa. This time around, the song is aiming to raise money to support the fight against Ebola. However, the song is not without its critics; Geldof and the song's amended lyrics have been accused of being patronising and not an accurate reflection of modern Africa.

RBS, which is 81 percent owned by the taxpayer, received a £56m fine this week following a breakdown of their online banking system in June 2012, which left customers locked out of their bank accounts for days on end. The fine comes only eight days after the bank was fined £400m following the forex rigging scandal. So not a great couple of days then.

The Labour Party created a Twitter storm for itself this week after MP Emily Thornberry tweeted a photograph of a house clad in the St George's Cross in an apparent attempt to belittle the owner. She was subsequently belittled by the Twitterverse before being asked to step down from her position in the shadow cabinet. Ouch.

This "thorny" incident came as political parties spent a final day campaigning for the Rochester by-election, which was prompted by the defection of Conservative MP Mark Reckless to the UK Independence Party. Whilst some may have thought this was a case of reckless by name, reckless by nature, his gamble paid off—he won the seat with a 2,920 vote majority. The ever-popular Mayor of London, Boris Johnson, is causing a transatlantic storm after refusing to pay taxes in America. Despite holding an American passport, Mr. Johnson has argued that he lives and works in the UK and that he is not prepared to pay any taxes in the US.

Even When Apple Gets It Wrong, They Get It Right