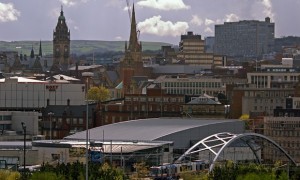 The English town of Sheffield is going to be the second "Northern Powerhouse", the Chancellor of the Exchequer announced today. This means that the city shall be given a number of devolved powers, including transport budgets and strategic city planning, which is intended to help it strengthen its position as a world manufacturing centre. This is part of government's plan to financially boost the north of England, following significant levels of criticism at the growing inequality between London and the rest of the country.

The director of 'Withnail and I', one of Britain's most famous cult films, claims to have solved the mystery of the world's most notorious criminal - the case Jack the Ripper. After 15 years of research, the long-time friend of Johnny Depp and Steven Spielberg has claimed that the reason the culprit was hidden for so long was due to his association with the freemasons - a society that everyone from the Royals to the heads of state departments such as the police, were members of. The truth? Who knows. Feel free to decide yourself...

The ever controversial Uber has been a topic of conversation this week as 'Transport for London' proposed strict rules to tame the disruptor, whilst under pressure from London's black cab drivers. The proposed regulations would mean that Uber could no longer show the availability of drivers in the area, nor could it pick up customers as they ordered, being obliged to wait at least five minutes between orders and pick-ups. A petition to counter the proposals was set up immediately, which within 12 hours had over 100,000 signatures. Protesters claim that such regulation is not in the public interest. No doubt, more news to follow.

What Warren Buffett's Take on Women and Work Means for PR