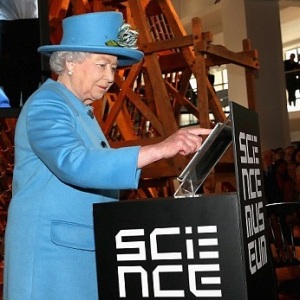 Living up to the British stereotype, we're kicking off with a story about The Queen this week. Her Majesty tweeted for the first time today through the @BritishMonarchy account as she launched the new 'Information Age' exhibition at the Science Museum. We also like to speculate that she is an avid Snapchatter in her private life. Read More

The supermarket chain Tesco is famous for the slogan "Every little helps" and it appears they could be doing with a little help of their own as they announced this week that their profits have dropped by 92%. The firm has been struggling since it was uncovered that its half year profit expectations had been overstated by close to £250 million. Read More

Europe had flashbacks to the Cold War this week as Sweden went on the hunt for a mini-submarine in its waters which, it said, was "probably" Russian. The search, which has now been called off after several days, was described by a Swedish Rear Admiral as like "looking for Jesus" ... everyone knows who he is, but no one has seen him." Read More

Lord Hill has been confirmed as the EU commissioner for financial services after a second round of questioning from MEPs. In an unusual step, Lord Hill was recalled by MEPs but in the end was voted in by a resounding margin of 45-13 committee members. Read More

On that note, that tumultuous relationship between Britain and the EU hit several bumps in the road this week. Jose Barroso, the outgoing President of the European Commission, argued that the UK would have "zero" influence if it were to leave the EU. Ever a man of the people, Prime Minister Cameron has defiantly reminded Mr. Barroso that his real bosses are the citizens of the United Kingdom, and that he will serve them as opposed to "pandering" to the EU. Read More

If that wasn't enough, and reminiscent of a messy divorce proceedings, the EU has today demanded £1.7 million from the United Kingdom arguing that previous budget contributions have been based on an understatement of the size of the UK economy. Not one to go down without a fight, the Chancellor described the decision as having been made by "junior officials" in the "bowels" of the commission. Read More