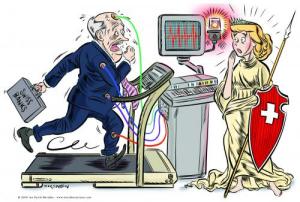 Lloyd's Bank this week announced its plans to go digital. However, famous for promising to be the last bank on the high street, Lloyd's won't be completely doing away with its physical presence on British streets. Instead, the bank wants to create a new type of branch with iPads and internet discussion screens which will allow customers to chat with staff who may not be physically in the branch. How about that for science fiction? Read more.

Are you feeling stressed? Think about Europe's banks for a second. In the latest test of European banks, 25 of 130 banks failed. However, in a prophetic vision, the soothsayers at The Economist argue that banks declared fit in past stress-tests have toppled over soon after. Read more.

Things have been going from bad to worse for supermarket chain Tesco. Following recent accusations of accounting anomalies, the Serious Fraud Office have launched an investigation into the business. Whilst they're at it, they might as well check out this deal on Dr. Oetker pizzas! Read more.

Finally, a story for the exercise dodgers—running can be bad for your health as one Dean Farley found out this week. Out for his lunchtime run, Mr. Farley inadvertently caused a security situation when he ran directly into the Prime Minister! The PM was promptly bundled into a car and Farley was arrested. He was eventually released as the police were able to establish there was "nothing sinister" behind the incident. You never can be too careful with those joggers though! Read more.