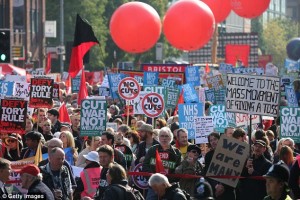 The Times newspaper has splashed its front pages with an investigation it has conducted in the UK into America's favourite Coca Cola. The cheeky so-and-so's have apparently been attempting to pay scientists and sponsor research to show that there is no link between fizzy drinks and obesity... Nice try, guys!

There has been somewhat of an uproar following the Tory party conference, which has been taking place in Manchester this week. Hundreds of anti-austerity protesters turned up clad in pig masks and camouflage to show their discontent to the country's leading party. #yoink!

Social media has been going haywire this week due to one of your very own countrymen! Scott Waters from Florida visited the UK for the fourth time a few weeks ago, and has written what is being called the most apt description of the UK of all time. We think the majority of it is all rather flattering, which goes someway to say why it has been shared so many times, but we would love to hear what you have to think. Let us know!