Building a personal brand has become en vogue thanks to the taking over of Twitter and other social media platforms and working in PR, I’d like to believe I’m pretty savvy about the topic.  A topic I’m not as wily in is football.   However, after reading sports writer Sean Gregory’s article on Time.com about Chad Ochocinco contemplating changing his name back to Johnson, I wondered why on Earth he’d do that! 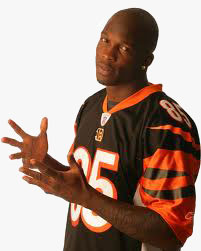 There’s nary a football fan (or avid VH1 reality show viewer) that doesn’t know who Chad Ochocinco is, but in case you’ve been living under a rock for the past several years, Mr. Ochocinco, number 85 on the Cincinnati Bengals changed his name from Chad Javon Johnson in 2008 to Chad Ochocinco because…well, who knows what was going on his head.  Nevertheless, the move was a great one in terms of helping Ochocinco to build his personal brand beyond an NFL player to a household name.  Since the name change he’s had his own VH1 reality show called “The Ultimate Catch,” a stint on ABC’s “Dancing with the Stars,” endorsements with GoDaddy.com and Reebok, not to mention 1.6 million followers on Twitter.

In my opinion, Ochocinco’s potential move is a bad one.  Ochocinco has not just become his legal name, it’s a persona.  It’s what advertisers and executive producers are willing to shell out millions for.  Reverting back to Johnson at this stage in his career will confuse his fans and take away some of his appeal.   I’m sure far more people tolerate the antics of Chad Ochocinco whether or not he’s playing well.  Chad Johnson – not so much.

It’s imperative to be consistent in how you market yourself to others when building a brand.  Without a unifying message and approach, it’ll be hard to build a following.  You want to captivate your audience and keep them interested in what you’re doing and saying and remind them why they should care.  Ochocinco’s  got personality – he’s the guy who wants to tweet from NFL games, the one who can have 20 women vying for his affections and agree to be televised doing it.  Chad Johnson is, well…just basic, and who wants to be basic when you can be deluxe, right?

So, Mr. Ochocinco, if you are at all seeking the opinion of a 30-something NYC-based PR chick extraordinaire, I have two words for you – CHILD PLEASE!