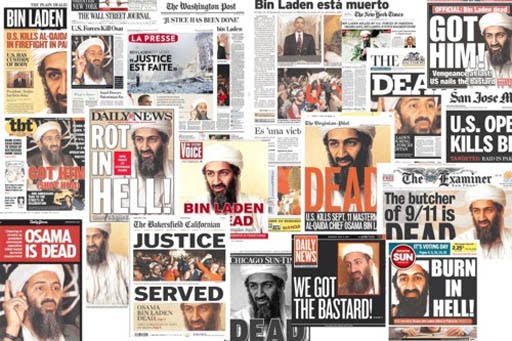 Scanning the PR industry trades last week, an article about the impact of the Bin Laden news on PR professionals caught my eye.  The article suggested to PR pros:  “Don’t even try to pitch a story this week, and you’d better inform your clients that any news they may have in the coming days will not get any coverage.”

The article was written by a former reporter turned crisis/issues management professional. Could he be on to something?  Would pitching the media about anything non-Osama-related be a fruitless exercise?  Were reporters really only interested in pitches with a Bin Laden angle?  To get to the bottom of this, I picked up the phone and reached out to some of my best press contacts.

As it turns out, this article was spot on.  Reporters were indeed only interested in Osama-related topics.  They suggested I follow up in a week or so with any pitches related to anything non-Osama until they finished up their Bin Laden coverage.  Below is a summary of what I found out from my round of phone calls about what some of the most reputable news outlets were working on:

Of course, none of the above stories were actually in the works.  And, I did not really confirm from my contacts that any pitches not related to Osama would have to wait. What I did actually learn from my outreach is that a timely, compelling pitch, if delivered to the right news outlet in a thoughtful way, will more often than not appeal to scoop-hungry reporters and their editors. The volatility we have seen over the past few years seems to have shortened news cycles, creating tremendous opportunities for PR to continue to influence media coverage, regardless of the hot news of the day.

Life in the PR Trenches: Bombs Away!