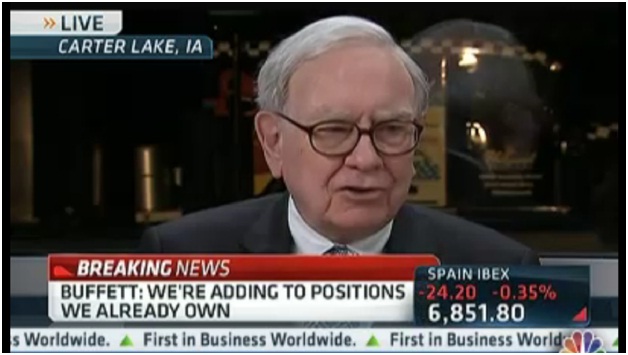 Following his annual meeting with Berkshire Hathaway investors over the weekend, Warren Buffett sat down with Becky Quick from CNBC for a special edition of Squawk Box. At exactly 6:52 AM, they started to discuss whether or not the banks today are “too big to fail.” Andrew Ross Sorkin (who, as author of the best-selling book Too Big to Fail, certainly understands this topic) asked Buffett about Glass-Steagall, and if he thought the 2008 crisis would have happened if the act hadn’t been repealed. Buffett’s answer essentially was, well, it’s complicated.

For those who aren’t caught up on their Depression-era history, the Glass-Steagall Act of 1933 effectively built a wall on Wall Street, separating banks that did risky investing from those that did basic lending. In 1999, President Clinton signed a bank deregulation bill, Graham-Leach-Bliley, that broke Glass-Steagall as if it were… glass. Graham-Leach-Bliley is often cited as a cause of the ‘08-‘09 meltdown. Warren Buffett here acknowledges that while the act likely did contribute to the financial meltdown, it’s much more complicated than “too big to fail.” Buffett’s exact words, actually, were “size did not solve the problem!”

Sorkin responds to Buffett acknowledging that it may be easy to blame Glass-Steagall, but that it’s likely too simple.  He said, “When I think about Lehman and Bear I think—Glass-Steagall had nothing to do with that!” What Sorkin is alluding to is the fact that the behemoth banks created in the wake of Gramm-Leach-Bliley (Citigroup, Bank of America and JPMorgan Chase) are all still around today.  The banks that failed (Bear Stearns and Lehman Brothers) actually stayed remarkably true to their pure investment bank model after Gramm-Leach-Bliley was passed. The first fatalities of the financial crisis were firms that didn’t change very much.

We all know the boiled down version of what caused the financial crisis: firms made riskier and riskier bets and lawmakers didn’t step in to stop them. Bear Stearns, Lehman Brothers and others chopped bad mortgages into thousands of little pieces and acted as if the sum of the parts was safer than the whole. But can we point to this one piece of deregulation (Graham-Leach-Bliley) as the culprit? Perhaps more to blame is the Commodity Futures Modernization Act, passed a year later, which unleashed the derivatives market and paved the way for banks to become more aggressive about investing in mortgages.

This brings to mind a much more recently enacted piece of legislation which also passed Congress with overwhelming support: the Jumpstart Our Business Startups Act (JOBS Act). The deceptively named "JOBS" Act appropriates two good ideas - "crowdfunding" by individuals and the need to find investment capital for small and medium-sized businesses that are the engines of job growth. But it also undoes key provisions of Sarbanes-Oxley, the law passed in the wake of Enron’s fraud. Wall Street watchers are already speculating about the unexpected impacts of the legislation.  As communications professionals, we are most interested in the language that suggests that marketing restrictions on investors will be eased. But what about other possible ramifications? The act was passed with overwhelming bipartisan support, but history tells us that just because a piece of deregulatory legislation is widely supported does not mean it won’t become controversial down the road. In 1999, the Gramm-Leach-Bliley Act had such a chorus of bipartisan support that it passed the Senate 90-8. How will the Warren Buffetts of the future view this piece of legislation? And perhaps the more pressing question (given the recent ratings plummet) is: will they be discussing the issue on CNBC?

The UnPRedicted Merger of Equals