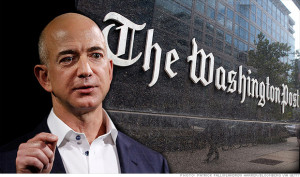 In a 2010 TechCrunch interview, super angel investor and Andreessen Horowitz co-founder Marc Andreessen said that in order to adapt and survive, traditional media outlets would have to “burn the boats.”  As someone who’s started multiple billion-dollar companies, sits on the board of directors of Facebook and eBay and runs one of the world’s most renowned venture capital firms, his opinion carries considerable weight.  “Burn the boats” was a reference to Spanish conquistador Hernán Cortés’ famous command when his army landed in Mexico on the shores of the Yucatan.  It signifies a total commitment to the future and a removal of any crutches, in this case print media.

Three years later, following Jeff Bezos’ acquisition of The Washington Post, his advice couldn’t be more relevant.  In a recent GigaOM article, senior writer Mathew Ingram argued that, despite the immediate financial repercussions, Bezos should channel his inner innovator and shut down the printing presses as an investment in the newspaper’s future.  As a student and scholar of the Internet, Bezos might not experience the same hesitations traditional media decision makers have struggled with for years.  Ingram believes this move would ultimately give The Washington Post a psychological advantage over the other media giants, because as Nate Silver recently pointed out on Twitter, “Extreme risk-aversion is NOT a good mentality when revenues are declining, as at most newspaper brands.” There’s also been much speculation that Amazon and The Washington Post might be more integrated than was originally thought, which could give it a competitive edge impossible to replicate.

Quartz, Medium and Gawker have all been experimenting with algorithms to incorporate the best reader-generated content into their articles.  “We have a really smart audience, a lot of our readers have a lot to add, and we certainly believe in that mantra that collectively they know more than we do. So we wanted to try to design a system that would take advantage of that and give space for their thoughtful contributions while avoiding the traditional pitfalls of comments,” said Quartz senior editor Zach Seward in a recent GigaOM article.  For the increasing amount of freelance journalists, start-up Pressfolios launched a platform allowing users to build online repositories for their work with built-in website tools and a cloud backup service.  In the past year, it seems every major news outlet, including The Wall Street Journal, Dow Jones Newswires and The New York Times, have been forced to make significant layoffs, including seasoned editors, in order to run a leaner ship.  “We just had a lot of layers ... that's just an extra layer that we can't afford,” said New York Times executive editor Jill Abramson about the layoffs in an interview earlier this year.

All signs point to an increasing shift from print to digital, which is generally not contested, but the question is which of the media giants will be the first to do away with print altogether?   Of the current owners, Bezos, who started e-commerce retailer Amazon, seems to be the most likely candidate.  He believes wholeheartedly in the unlimited potential of the Internet and understands how to engage customers online.  Maybe more importantly, he’s dedicated his life to operating Amazon, while owning The Washington Post is a more of a hobby or side project.  “I won’t be leading The Washington Post day-to-day,” he said in a letter to Washington Post employees last week, “I am happily living in ‘the other Washington’ where I have a day job that I love.”  It’s possible he won’t feel the same emotional connection to print as some of his competitors, allowing him to do what’s best for business rather than thinking about The Washington Post’s legacy as a traditional media outlet.

If Bezos decides to shut down the printing presses and take The Washington Post completely digital, it will likely force The Wall Street Journal, The New York Times and other big players to make the decision sooner than they expected or hoped for.  Whatever happens next, one thing is clear: when he bought The Washington Post, Bezos bought the ability to drastically transform the current media landscape.  Who knows, maybe we’re all just witnessing a mastermind’s elaborate Kindle proliferation plan coming to life.

The Uberization of Human Rights

In a time when real and impactful technological advances are few and far between, it's no surprise that global taxi app Uber has had a profound impact on all aspects of society. In fact, not a week goes by without someone, whether in the office, the street or in the media, mentioning the brand in some shape or form. For example, it is regularly referenced positively to illustrate the recent disruption, the 'uberization', of traditional industries (e.g. banking or health), and praised for the increased level of convenience that it has brought to people's daily lives with the offer of a more cost-effective and reliable mode of transport.