Can You Draw a Flip Flop on an Etch-a-Sketch? 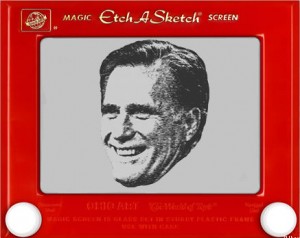 Top communications strategist for Mitt Romney’s presidential campaign Eric Fehrnstrom created a social media and cable news firestorm a few weeks ago when he now-famously referenced a children’s toy in an attempt to explain how Mitt Romney would be able to erase the difficulties of the Republican primary campaign as soon as he clinched the nomination.

“Everything changes,” Mr. Fehrnstrom said on CNN. “It’s almost like an Etch-a-Sketch®. You can kind of shake it up and restart all over again.”

This unfortunate and sound bite friendly metaphor played right into the problem that has been plaguing Romney with both the right-wing base and moderates alike: he is perceived as a “flip-flopper” on key issues like healthcare reform, gun control and social issues like gay marriage and abortion. As he tries to score points with the primary voters (who are far more conservative than the ones he faced in blue state Massachusetts), political pundits point out that he risks alienating the unaffiliated voters he would need to win the general election. As they try to walk the line between too-conservative and not-conservative-enough, Romney’s strategists understandably are hoping the transition from primary candidate to general candidate will go smoothly.

The success of rivals like Rick Santorum and Newt Gingrich, who would be virtually unelectable in a general election, has left Romney looking tired, stale and increasingly desperate. His attempt to connect with Southerners by expressing his love of cheesy grits was particularly painful to watch. Even more troubling is the negative reflection the whole primary circus is having on the Republican party overall. A loyal member of the GOP can only hope that Mr. Fehrnstrom is right and that the party will be able to shake it up and start again with a clean slate.

As bad as Fehrnstrom’s gaffe seems now, it will likely become old news in the near future. The sheer volume of politics has left us with shorter memories and attention-spans. Recent history shows that the Etch-a-Sketch theory of politics is not too far from reality. Barack Obama crawled across the Democratic primary finish line in 2008, only to turn around and give rival Hillary Clinton a key cabinet job. Romney may well make a similar recovery. Primarily, this incident provided fodder for the 24/7 news media, who have been lapping up the 2012 GOP primary as if it were the latest season of American Idol. The actual political impact has proved to be negligible, and a recent poll suggested that no one outside the Beltway has followed the story.

The real winner here has proved not to be Rick Santorum or Newt Gingrich, try as they might to win over conservatives by trotting the toy out at rallies, but Ohio Arts, the company who creates the Etch-a-Sketch. Sales have increased by at least 1,500 percent and Ohio Art, the company that owns the toy, saw its stock price nearly double. Martin Killgallon, marketing director for Ohio Arts, cleverly suggested that the toy was bipartisan, saying, "We have a left knob and a right knob, so we neutrally speak to both parties.” The Etch-a-Sketch gaffe may have as much of an impact on Killgallon’s communications career as it has had on Fehrnstrom’s. But really, when was the last time a child actually played with an Etch-a-Sketch? It’s 2012—isn’t there an app for that?

Burnt Out By 30? Kelly Cutrone's View on Millennials in PR