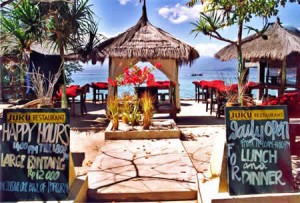 After traveling in Indonesia for three weeks (Bali and Gili Trawangan), I was impressed by the way relationships are used as the backbone in conducting business; specifically  in such a poverty-stricken and developing country.

Below are a few observations:

At first you think the locals are being extremely helpful in giving you advice on where to go, stay, eat, etc.  But really it’s because they receive a commission for sending/bringing you there.  Once I caught on to the way things worked, I was skeptical about the advice, yet I was laughing inside on how savvy they were about business. A few examples include:

I thought that I was getting an "in-the-know" with the locals, while they're simply conducting good business.

Just as relationships are important in making money in Indonesia, the same holds true in competition.  In one small town I tried to bargain with a driver, but he asked if I had already promised another driver.  Yes, I had made arrangements but thought I could cancel them if I found a better price.  This driver wouldn't take me because I had already "promised" another driver and his business would suffer if he cut into someone else's.

Lastly, Facebook is used as a tool in business, as well. I was shocked to see how many people in Indonesia were on Facebook and how it is used for business.  To put things into perspective, a construction worker (which is a really good job in Indonesia) can make IDR $40,000/day (equivalent to about US $4.50).  Yet you will find old and young alike in the Internet cafes updating their profiles when it cost IDR $7,000 (almost $1) for 20 minutes of Internet time....that's almost one fourth of a construction worker's wage for the day!

In Indonesia, all the drivers wanted to friend me on Facebook because it's a good referral tool for them … how do you think I found some of my drivers in the first place?  It's also a status thing for them to say they have "friends" from countries all over the world.

Moral of my experience:  relationships matter and are the key to business success - whether you're in NYC or rural Indonesia - and social media helps extends those relationships to build better business.

Image is Everything: The Evolution of Icons