Dead Fish=Bad PR: How One Agency's Promo Went Belly Up

Looking for a way to hook advertisers, a South Australian tourism organization sent 55 live goldfish in bowls to media buyers. The fishbowls carried a message: “Be a big fish in a small pond and come test the water.” The fishy come-on was an invitation to visit Adelaide, with the goal of encouraging ad buys in the South Australian market. 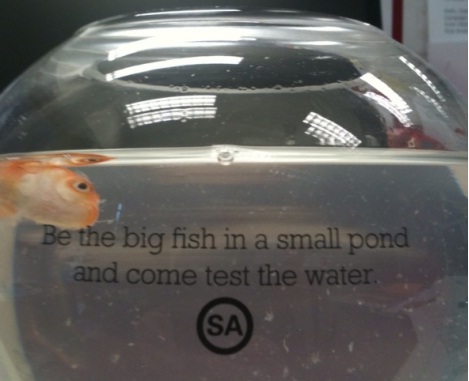 It doesn’t take much foresight to predict what happened next. The fish, some belly up and floating lifelessly in their bowls, began arriving at their destinations. Of the fish that weren’t DOA, many reportedly died within days.

As one recipient, who arrived at work to find a decomposing fish on his desk, said, “Any gift which ultimately leads to the recipient flushing it down the toilet in rotting form is not the best association for your brand.”

The organization that sent the fish, Advantage SA, bills itself as “positive voice of South Australia.”

Putting aside for a minute that the “big fish, small pond” campaign itself was pretty cliché - as well as the obvious maltreatment of the fish - the overriding issue is why nobody at Advantage SA put a fast and decisive stop to this stupid stunt. Any reasonably thoughtful person could have seen that it was a disaster in the making.

As criticism - even horror - of the stunt grew, the head of AdvantageSA apologized. CEO Karen Raffen was quoted in The Australian saying, "It was certainly not our intention to either harm or cause any distress to the fish or those receiving the invitation."

Raffen also noted that, “In hindsight we would probably not do this again.”

Of course they’d never do it again. But the real question is, Why would they do it to begin with?

Prosek Takes on the #MannequinChallenge

Apple Defies All Rules of Growth While Redefining Communications Delivery