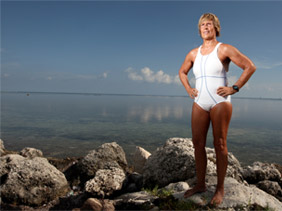 Thirty-five minutes into my cardio work out at the gym, Diana Nyad emerged from the water on the sandy shore of  Florida. Admittedly, I had never heard of the 65-year-old before (or her five failed attempts). I don’t follow swimming. And I don’t have much interest in Guinness record breakers. Yet as I watched this woman on my tiny elliptical machine TV, I was touched in such a profound way.

I couldn’t help but to reflect on Diana’s five failed attempts. What made her want the Cuba-Florida trek so badly? Why would she risk her life to swim with jelly fish and sharks? Was she crazy or was she simply trying to prove a point?

I’m sure the answer to the latter might be a little of both. Regardless of how you look at it, Diana had achieved something incredible; something that we all could learn from. Through risk, perseverance, and planning she had inspired a nation to believe in their dreams, to work for them as a team and achieve them with dignity and grace.

So when I saw the front pages of the Wall Street Journal and the New York Times the next day, I wasn’t surprised to see her photo. But it did make me smile to know that in a world filled with global tension, economic woes, career obstacles and personal demons, that this was exactly the kind of life lesson we needed.