The past week was an odd one: Abercrombie & Fitch's latest drive-by baiting gave local news stations a reason to incite some discourse among moms and nannies at local playgrounds.  An escaped cobra charmed-up 213,688 Twitter followers in less than 4 days (myself included, despite being severely ophidophobic). Then I read a post on AnimalNewYork's Tumblr that probably would have whipped me into my own Abercrombian dervish of disapproval had I not worked in marketing for 12 years. Clothing designer Marc Ecko's new appropriately literal "branding" campaign, "Branded for Life" is offering a 20% discount for life to anybody willing to tattoo one of two Marc Ecko brand logos somewhere on their body. Permanently. Still with me?

As ridiculous as my mother most certainly thinks this is, I personally think it's brilliant for two reasons: 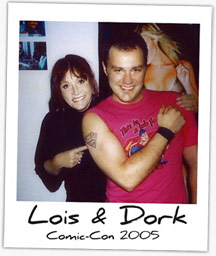 As this photo clearly shows, I LOVE Superman. I love Superman A LOT. And I had a much more stringent workout regimen when I paid twenty bucks to take this picture with Margot "Lois Lane" Kidder at Comic-Con circa 2005. My point is, I get it and clearly Marc Ecko knows his fans get it too.  Although it's a touch extreme, Branded for Life laughs at those wimpy "check-in on Foursquare" and "Like us on Facebook" loyalty marketing campaigns. They're daring fans to earn that 20% discount for life; be forever accountable for their brand loyalty by literally wearing a rewards badge that never goes away (without lots of laser treatments).  Even if nobody goes through with the call to action, the marketing genius lies in Ecko's making that call to begin with.

If you could choose the brand, would you tattoo its logo on yourself in exchange for a 20% lifetime discount?

Stop Stalling: Perfection is an Aspiration, Not a Destination

McDonald's Misses Out on Joke and Marketing Coup

'Leaning In' to Sheryl Sandberg's Book