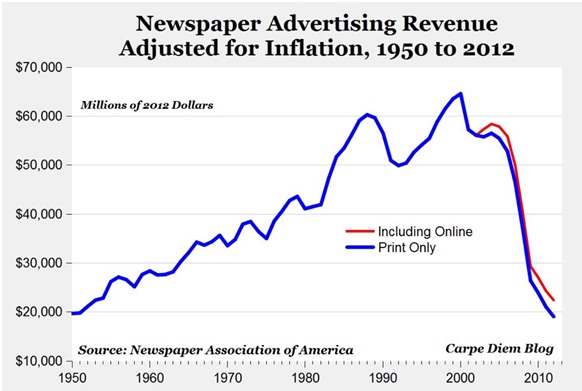 Advertising doesn’t cure diseases or feed hungry people, but society is better off with advertising than without. This is the mantra taught to most students enrolled in “AD101.” The number one benefit of advertising is that it subsidizes the cost of news and entertainment. Why is my Metro paper free every morning? Why do I only pay $50 dollars for 200 cable channels but HBO alone costs $20 a month? Advertising!

The floundering newspaper industry has been a topic of conversation for so long it is practically white noise. However, recently released data sheds light on just how dire the situation is from a historical perspective. According to research by the Newspaper Association of America, newspaper advertising revenue today (adjusted for inflation) is on par with how much newspapers were raking in during the 1950s. Even the Mad Men of the 1960s sold more newspaper ads than we do today.

Although there are fewer newspapers today than there were in the 1950s, so in theory each newspaper is getting a larger share of the pie. In the ’50s there were 1,772 daily newspapers and only 1,480 in the year 2000. That figure has dropped further in the last decade.

Today there are considerably more platforms for newspapers to place advertising: online, mobile, tablets. And as my buddy Sean Silva recently wrote, publications such as USA Today are overhauling their designs and layout to create continuity between their growing digital platforms. It is safe to predict in the future more investments from traditional media that leverage digital counterparts to increase and supplement new revenue streams.

In fact, this week the Atlantic’s digital-only sister publication Quartz (qz.com) went live. As The New York Time reported this weekend, the new website geared towards global business executives was born in part out of Atlantic Media owner David Bradley’s inability to economically turn The Atlantic into a glossy weekly publication. “It’s become very, very clear to me that digital trumps print, and that pure digital, without any legacy costs, massively trumps print,” Mr. Bradley told the NYT. Where else are you seeing digital media overtake print?

Finally, A Cup of Sunshine