In this week’s Fintech Tuesday Blog, we focus on the trends in global fintech funding, the competition for the ‘global fintech hub’ title and the payments landscape.

According to a report by KPMG and CB Insights, Global fintech funding has slowed. The number of fintech deals hit a peak of 169 in Q2 2015, and in Q4 2015, fintech funding reached its lowest point since Q3 2014 at only £1.2 billion ($1.7 billion). There are a number of factors driving this trend, including increasing risk due to political and economic trends, as well as investors taking a closer look at what floats and how things develop. Despite the decrease in funding, disruption in financial services is set to continue as fintech companies are introducing new, innovative products and providing better user experiences than what is currently available, and regulators are opening up the market so that these companies can challenge legacy players. See below for a graph of the recent global fintech deals. 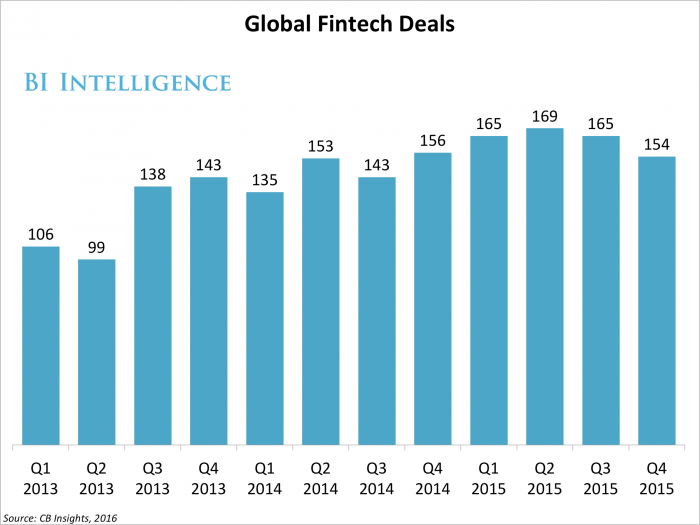 This ability to disrupt the existing landscape and challenge the legacy players is increasingly evident on both sides of the pond. That said, in spite of the U.S. being able to call upon Wall Street and some of the world’s biggest banks, the country lags behind the UK when it comes to (some areas of) fintech. The first thing that comes to mind is payments. To pay for a purchase or a meal in the U.S. an individual has to give the waiter their card to swipe (out of plain sight) and then be brought a receipt to sign – a process that has been around since the 1970s. In the UK meanwhile, everything seems to be much easier (and safer), with customers using the chip and pin system, which has been around since the beginning of the century. The ocean wide divide in terms of payments, between the two countries is highlighted through a series of interviews with international business people, featured in a recent article in The Memo.

Speaking of payments, Android Pay is preparing to launch in the UK in the coming months and has lined up partnerships with a broad range of banks, retailers, payment networks and apps, according to a blog post from the mobile platform's website. The technology will allow individuals to make contactless payments and in-app purchases without them having to re-enter payment or address details after every transaction. Although Apple Pay has been available in the UK for longer, things are looking good and there is a good chance that it will succeed:

Despite these positive signs, the competition to become the global fintech hub is heating up. If you believe the UK government’s Office for Science, the UK is one of the leading global fintech locations thanks to availability of tech talent, capital investment, and its supportive regulatory policy (however, other countries including the US and China are not too far behind) compete closely for the top spot. For the UK, a booming fintech industry is desirable for two reasons: it helps the national economy, the UK fintech industry generated £20 billion ($28 billion) in revenue in 2014, and it promotes competition and growth in the financial services industry.

Maintaining a leading position is also challenging. While the UK boasts a number of advantages for fintech companies, it has a limited market of just short of 70 million people. To continue competing with more populous counties, the UK needs to create opportunities for firms to scale beyond its borders, which will in turn help organisations attract further investment and generate more revenue. As a result the UK’s financial regulator, the FCA, has signed a co-operation agreement with the Australian regulator, ASIC, in order to promote innovation in both countries' financial sectors. Read More.

The Importance of Internships