Give & Take: Running to Give

For runners, October is a particularly magical time to be practicing our happy obsession. While the sun is setting earlier each day, the temperatures are that perfect mix of warm and cool, sunny and shady, and the lingering humidity from the summer months slowly – but surely – ebbs away. It’s the perfect time of year to be spending long periods of time out on the road, either running for fun and exploring a new neighborhood, joining a running group organized around improving speed times, or training and running a half or full marathon. It’s also a time for community and running to raise awareness (and money) for organizations and charities dedicated to doing good work for those around us.

When I (Mark Snyder) run marathons (often traveling to other cities for the different courses and crowds cheering us on), I try to find a local hospital or health-related organizations to represent during the race. Running is a great way to stay healthy and keep your cardiovascular system in tip-top-shape, so it is always top of mind. Memorial Sloan Kettering’s Fred’s Team is a long-standing organization dedicated to funding cancer research and is the gold-standard for marathon training; Nationwide Children’s Hospital in Columbus, Ohio has a wonderful marathon program, Children’s Champions, that allows the kids themselves to be celebrated mile by mile throughout the race; Henry Ford Health has a robust and long-standing history of supporting races throughout the state of Michigan; and in Mesa, Arizona, Mountain View Medical Center works with their organizers to make sure the local race has that “desert air” vibe while also ensuring their resources are available to all economic levels in their community.

Running is one of the most rewarding sports– in part because participating in training and races has the potential to also help so many. Here are a few of my fellow Prosekians who are running this season in marathons and some details about their charity of choice, as well as why it is important to them.

As a life-long runner it has been a dream of mine to run the NYC Marathon, and this year I’m looking forward to running 26.2 in the big apple to raise money for City Harvest! I couldn’t be happier to be running to help raise money to put food on the table for New Yorkers in need, especially as an avid cook myself.

City Harvest is New York City’s largest food rescue organization, helping to feed more than 1.5 million New Yorkers who are struggling to put nutritious meals on their tables. They collect & deliver food to hundreds of food pantries, soup kitchens and community partners across all five boroughs with the aim of building a food-secure future for all New Yorkers. With the pandemic's economic fallout, magnified by rising costs, food insecurity is hitting New York City families harder than ever. Together, the City Harvest marathon team has a goal of raising $400,000, going directly to help provide nutritious food for our NYC community.

Running has always been an opportunity to get some alone time – time to clear my head and even time to challenge and push myself. While the upcoming New York City Marathon won’t be the alone time I’m used to (there were over 25,000 finishers in 2021), it will certainly be a challenge. I finished the 2018 race as part of the Every Mother Counts team, and I was overwhelmed by an amazing sense of community during the final miles down Fifth Avenue and across the park. This year, I’m raising money for the Central Park Conservancy, an organization which oversees the preservation and maintenance of the 843-acre park. Urban green spaces were such a haven for city dwellers throughout the pandemic, and I’m looking forward to supporting the upkeep and accessibility of such a beautiful place. 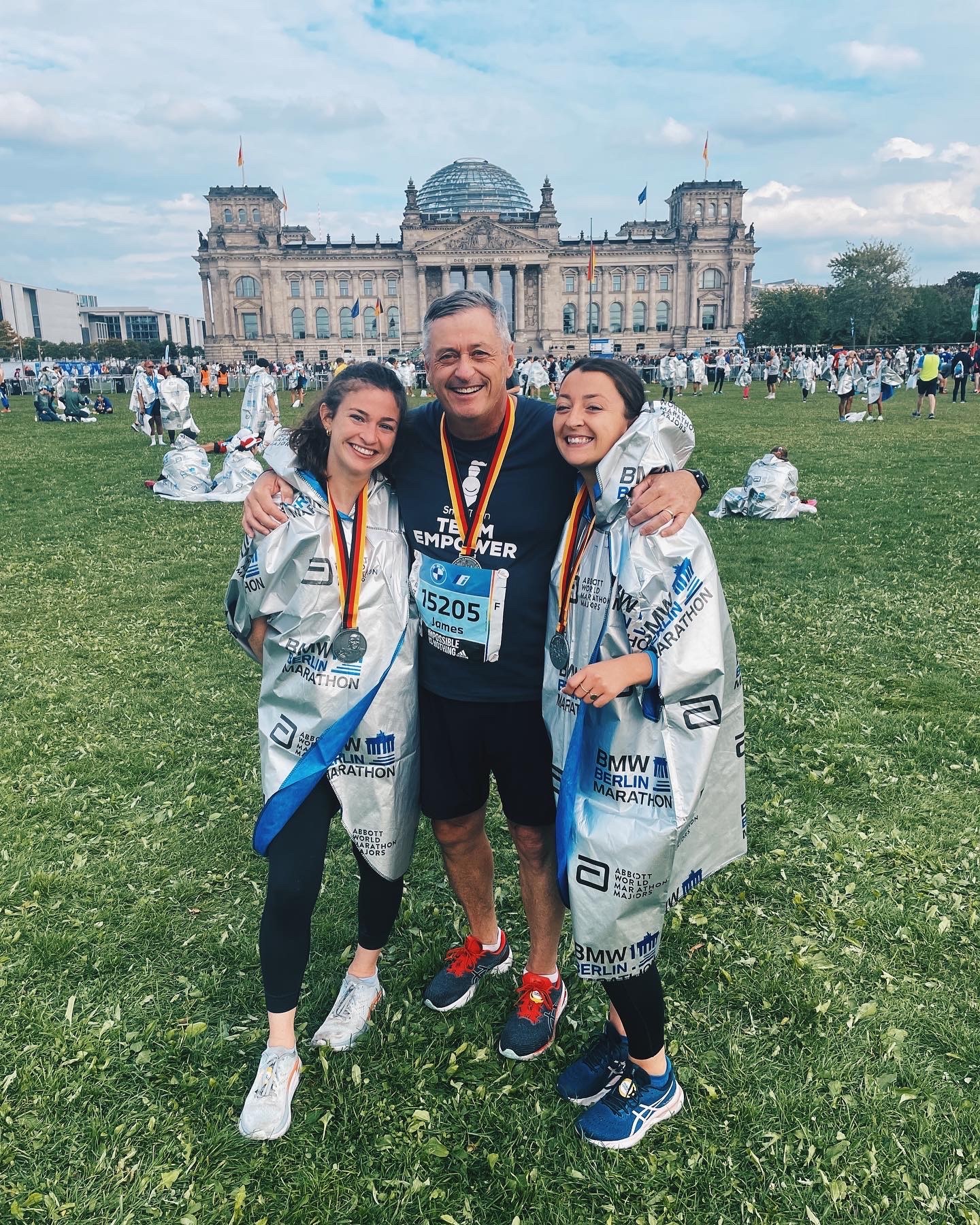 This September, I ran the Berlin Marathon for the Smile Train – The World’s Largest Cleft Charity, alongside my sister and dad. For those of you that haven’t heard of the Smile Train, the organization partners with local healthcare workers to provide expert medical training on cleft care with the goal of solidifying a sustainable solution to cleft care across five continents, including both through surgery and other forms of essential treatments like nutritional support, dental care and speech therapy. It was an inspirational organization to support, and just from the Berlin Marathon alone, Smile Train raised over $130,000 – as they say, turning many miles into smiles! This was my sister and I’s first marathon (my dad’s 12th), and it was an honor to support this cause!

I've had "finishing a marathon" at the top of my bucket list since I can remember - and it always felt like something I would eventually get to. This year, I decided to make it a reality and run the New York City Marathon on behalf of Team for Kids for New York Road Runners. Our fundraiser supports youth programs throughout New York and serves more than 240,000 students locally and nationally through free NYRR youth running programs, events and resources. Growing up in a mountain town, healthy lifestyles and running was a part of every day, and I’m so excited to complete my first marathon while supporting development of these character-building programs in schools and community centers nationwide. Getting kids active with healthy habits I think we can all agree fosters stronger communities across the board – and I was grateful to raise $2,620 on behalf of my team.

Hopefully, these stories will inspire you to lace up a pair of shoes.

Give & Take: Power of Perspective

In the latest from our Give & Take series, Catherine Adams shares her recent experience participating in New York Cares' Winter Wishes program.

In recognition of Mental Health Awareness Month, Annie Sedgwick sits down with her aunt, certified mental health counselor Margaret Hynes, to explore how to best cope with the immediate and long-term stresses of life, and improve our mental health

Mia Rossi reflects on Juneteenth and offers ways we can all take action.