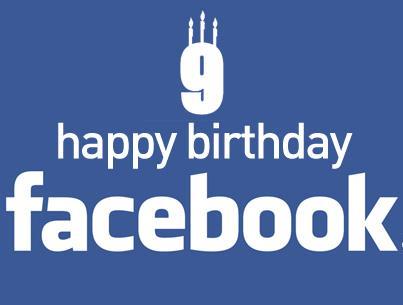 When my freshman year roommate found out I didn’t have Facebook the summer before we moved in, she respond in a mostly seriously manner under the guise of humor saying, “wait, are you actually a weirdo?” We spent our first phone call setting-up a Facebook profile for me, which as it turns out, was an excellent way to bond.

Since then, I, along with many others, have grown up alongside Facebook, which celebrated its ninth birthday this past weekend. It’s interesting to watch how the maturation of Facebook, has often that mirrored our own personal transitions. The introduction of the “I’ll Facebook you” vernacular into the dating culture, finding your identity and matching the photo sharing function to mirror it perfectly and "sharing” the really interesting things you are learning via links and videos (including the newest internet memes).

As my peers and I graduated and moved to all ends of the country and the globe we began to mark new milestones just as we met the Facebook “places” function along with the new timeline and cover photo profile format. We went about navigating our way in our adult and professional worlds just as “The Book” became an until via its IPO. Now as we take on bigger challenges, new titles or careers, finding life partners and starting families we thankfully have the News Feed and Ticker to help us stay connected, celebrate and support each other. And Facebook does the same, with new products, partnerships, acquisitions, expansion and strategic new staff.

In just nine years, Facebook has grown to reach more than 400 million users around the world. Did the founders dream it to be this monumental with such an expansive reach? Perhaps. But what they likely didn’t expect was how this piece of technology would become a part of how a generation’s coming of age story. Certainly from the moment my college roommate introduced me to the social network during that initial phone call up to now, Facebook and I have each grown, matured and found refinement. So happy birthday to you, Facebook. It’s been a joy growing up together. Here’s to the next nine years and all it has in store for us.

Your Employer Accessing Your Personal</br>Social Media Accounts... It Could Happen