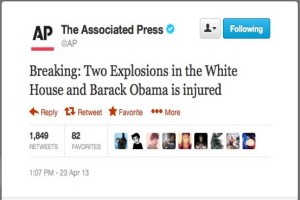 And there it was.  In the blink of an eye, 145 points on the Dow were wiped off the map.  While certainly not as large as the Flash-Crash of 2010, which saw glitches in exchange-trading software punish markets by several hundreds of points, yesterday’s market dip following a fake tweet posted by someone who hacked into the Associated Press Twitter account was, appropriately, a tweet-sized re-enactment.  It also showed the increased influence of social media on financial markets.

On the heels of last week’s events surrounding the Boston Marathon tragedy and the White House ricin scare, a hacker broke into the Associated Press’ Twitter handle yesterday and tweeted “Breaking: Two Explosions in the White House and Barack Obama is injured.” Markets instantly plummeted until the tweet was reported to be false a few minutes later.  The hacker would later identify itself as a member of the Syrian Electronic Army which, according to The Wall Street Journal, has targeted other media outlets in the past.

Because of how strongly social media is proving to impact financial markets, legislators are scrambling to gain more control over these situations.  Revisions are being made to the Cyber Intelligence Sharing and Protection Act (CISPA) that, if passed, would allow employers to access personal social media pages to ensure laws such as Regulation FD are not being compromised by interactions with friends or other social media contacts.

This raises several points:  first, there is the lingering issue of automated trading.  Part of the reason the market crashed so quickly following the hacked AP tweet was due to automated trading machines which scan social media sites for major news and place trades accordingly.  While tying up less human capital by using electronic trading is efficient, the system in place is proving to be anything but, evidenced by the failure of these machines to assess the credibility of yesterday’s fake tweet.

Second, there is the concern of cybercrime shifting to the media landscape.  Because the media has become so powerful, particularly here in the United States, it has raised its own profile and both the good and bad guys/gals have taken notice.  Clearly, any security breach in today’s world can have huge ramifications and it is crucial to enhance security levels of our social media channels.

Third, there is a glass half full way to look at this situation.  If one singular tweet of less than 140 characters can impact markets like it did yesterday, imagine the positive impact that a structured, targeted social media campaign can create for a company.

Social media has proven time and again during major news events (e.g. last week’s tragedy in Boston) to transmit news faster than even the most proactive news outlets.  It is imperative for companies, particularly those in financial services, to remain ahead of this trend as it continues to develop.

How do you believe the impact of social media has evolved based on recent events like yesterday’s AP-hacking? Join the discussion!

The Faces of Anonymity

"Life Would Be Sunny, With Plenty of Money and You"