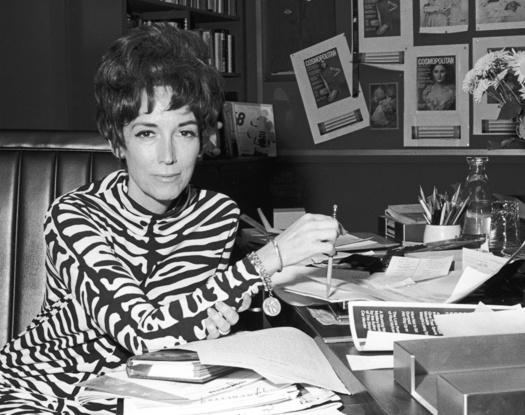 Helen Gurley Brown died on my birthday. She was 90 years old.

I always knew she was the famed former editor of Cosmo (she took over the magazine at 43 years of age, the same age I turned on Monday), but I never really understood what an inspirational woman she was. Her story, and the way she changed the way women consider their options in life and career, is truly astounding. Until Gurley Brown came along with her controversial suggestive covers and her open discussions about sex before marriage, few women ever considered the life of a Cosmo girl - unencumbered by marriage, self-made, sexual and ambitious. Until her, finding a husband and becoming a housewife was perceived to be the best and only option.

Although I never considered myself a Cosmo girl per se, I realize Gurley Brown's vision for women matches what I've aspired to - yes, a happy marriage with children, but also an exciting career that afforded experiences, intellectual stimulation and a paycheck all of my own. Gurley Brown's long and tough road to success in an era where the secretarial pool was almost the only option is truly inspirational. She rose to the top in large part thanks to her extremely hard work and belief system (she held 17 different secretarial jobs before landing an editorial job).

Helen Gurley Brown became editor of Cosmo at 43. She said the Cosmo girl was "the young woman she had been - or dreamed of being - 20 years before." Thanks to Gurley Brown and others we are confident to make choices about our lives and careers - as women - that are as traditional or Cosmo-esque as we choose them to be. This is a gift and a wonderful reminder to make the most of it.