"While there are promising signs in digital advertising and digital subscriptions, the print business remains under pressure. And our new products are not achieving the business success we expected, even though they are journalistic sensations." - October 1st, 2014: Dean Baquet, Executive Editor, The New York Times

Every year there are reports of newspaper layoffs and 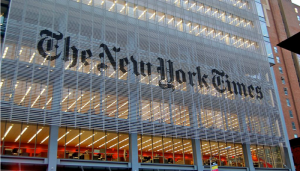 newsroom cutbacks at top-tier and respectable organizations as publications decide to dedicate more resources towards digital products. On October 1st, it was announced that The New York Times would be offering a generous buyout package for 100 volunteers or 7.5% of its 1,330 newsroom staff. If enough employees don't step up, there will be a round of layoffs to meet the quota. Reportedly, they'll have to layoff approximately 15-20 employees, though many notable and veteran journalists did take a buyout.

Working in public relations, we work with the media on a daily basis. Newsroom cutbacks affect us as well. There are fewer and fewer journalists covering more industries and beats. Many online publications hire based on the number of articles a writer can produce in one day making the priorities quantity over quality, which goes against all journalistic standards that print publications try to uphold despite decreasing budgets. The reality is money talks and if print wants to stay around, these publications also have to adapt to the changes of consumer preferences and start increasing revenues in other forms, like digital.

Digital media has brought a lot of creativity to journalism and provided a whole new way of telling stories, often referred to as visual journalism, which is the strategy of using photos or graphs or charts in combination with a written article to tell a stronger, more compelling story. Take The Wall Street Journal for instance. The publication has been testing new digital strategies, which can be a little shocking for media traditionalists. The New York Times as well, with their Upshot blog which largely focuses on data-driven reporting and analysis.

My colleague, Ryan Fitzgibbon, recently debated, does it even matter if the article makes print? It's a hard question and every client has a different opinion. Regardless, I believe we all have a soft spot for print. I get so much glee from seeing my client's name in print because I know from working in public relations that it's harder to get. So in one sense, I see it as more valuable. But, the other side is print newspapers are thrown away the next day. With digital, I can link back to an article posted online and written in one hour. But either way, shouldn't the end question be which is my desired audience reading more—print or digital?

Coming back to the topic at hand, the main problem The New York Times continues to struggle with is profitability. They're decreasing their editorial staff in order to build out a better digital platform that advertisers will be motivated to put their money towards. More advertisers will be picking those products over print advertising as the audience continues to grow larger digitally. Working in public relations, we'll have to keep toeing the print versus digital line for now as every client has their preference and priority and time will tell which of these is more valuable in the end.