I Scream, You Scream! 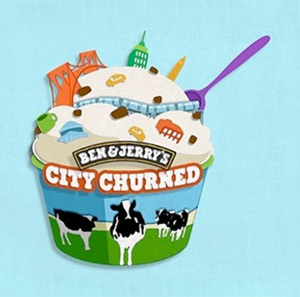 The New York Daily News reported last week that Ben & Jerry’s new campaign will allow local residents, from all around the country, to create a new ice cream flavor for their respective cities.  They’re calling the campaign - City Churned.

The new marketing campaign is asking fans from New York City, Washington, D.C. San Francisco, Portland and Seattle to create a brand new ice cream flavor.  Ben & Jerry’s will tabulate votes for the new ice cream flavor via the bike lanes that residents choose, the taxis they ride, and the ties that men wear, etc.

Here’s how it works:

In D.C., northbound joggers will count as votes for marshmallows, while joggers who take the southbound path will translate into a vote for peppermint flavor.

In New York, the number of people who hail uptown cabs versus downtown cabs will be the deciding factor between peppermint and vanilla.  Subway station turnstiles in Williamsburg will allows residents to choose between coffee or chocolate-flavored ice cream. And basketballers at the West 4th street courts can choose which basket to shoot at to vote for marshmallow or brownie topping.

Coffee drinkers in Seattle will vote for either cookie dough or brownies via the coffee sleeve they choose.

Tear off fliers posted on telephone polls will allow voters in San Francisco to choose between pretzels and marshmallows and thirsty dogs at local parks can choose between water bowls for chocolate or vanilla-flavored ice cream.

Fans from these cities will also be able vote for their favorite ingredients and even suggest a name for the flavor on Ben & Jerry's microsite. At the end of the poll, the new flavor will be unveiled at a local city event in each of the five markets.  The objective of the campaign is to create a new ice cream flavor as unique as the people that live in that city. For one day only.

While I am sure that Ben & Jerry’s will have no problem getting the sample size necessary in order to deem this vote statistically relevant, I do question whether the methodology will accurately reflect the City’s “favorite” flavor.   The local PR opportunity to support this campaign is huge.  Maybe next year Ben & Jerry’s should consider implementing hyper-local surveys in each of the five boroughs to determine whether there is any variation in flavor preferences in Manhattan, Brooklyn, Queens, Staten Island and the Bronx?

What flavor would you vote for?