Is Ambition a Dirty Word for Women? 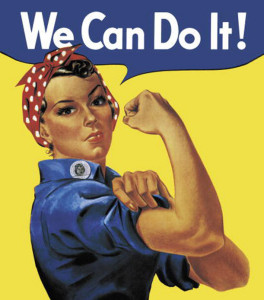 I recently read a blog post on DailyWorth that caught my eye and I could not resist sharing it.  It discussed the fact that in many industries Ambition is still “a four-letter word” for women. It truly surprised me that people still think this way in 2013.

“I think women should be just as ambitious as men, and be proud of it,” fashion designer Tory Burch, recently told Stanford business school.

Sheryl Sandberg, the Facebook COO whose new book, “Lean In: Women, Work and the Will to Lead,” is coming out next month, is fond of citing research showing that 36% of women identify themselves as ambitious in the U.S., a far lower percentage than India, Brazil and China. What about the other two-thirds of the women from that survey?  Why would they answer “no” to being ambitious? What messages are women in these other countries receiving that American women are not?

According to White House report entitled “Women In America”, women earn more college degrees than men, but at all educational levels, men still out-earn women.  However in PR, the men are actually in the minority in many agencies and women just starting out are most likely getting very similar salary offers to their male colleagues. In addition, they have the benefits of a wealth of dynamic female role models/mentors to help them shape their careers and offer guidance on how to seamlessly meld their personal and professional goals. By taking pride in their careers, women can be the best version of themselves, which can only elevate their roles as wives, mothers and employees!

Having worked in PR my entire adult life I have always been surrounded by strong, intelligent, creative women and seen them be praised for these qualities.  Many of these women have found a way to balance their desires for a fulfilling career with their chosen path of also being wives and mothers. I have tried to emulate our fearless leader Jen Prosek’s example in this regard.  After Jen, I was the first female employee to become a parent at Prosek Partners -- having my son Jacob in 2008. While I restructured my work schedule to accommodate my new role as mommy-in-chief in addition to my role as a PR professional -- my desire to succeed, learn and grow in my chosen field has not waned.

Today, as we watch women conquer the roles of secretary of state, United States Supreme Court justice, the C-Suite in Fortune 100 companies and as the First Lady’s initiatives get as much press as the President’s, it’s time to acknowledge that women can and ARE doing everything their male counterparts are doing, while also balancing their home lives.

I now realize how lucky I am to be in a women-dominated field that rewards female drive and ambition instead of stifling it and I will no longer take this for granted.

SEC Votes to Amend Rules on Marketing by Funds