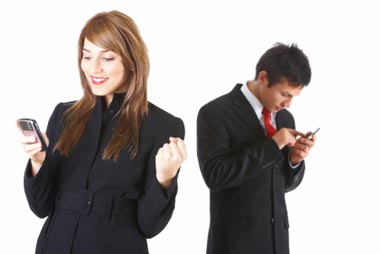 I recently attended a breakfast briefing for PR professionals with a technology reporter from a top-tier publication to learn more about his beat and how he likes to interact with PRs. Whilst at the event, the one thing that really struck me was the lack of networking by my peers.

The event was held over a buffet breakfast followed by a presentation and Q&A session. As the breakfast portion commenced I noticed that instead of actually networking people were standing isolated from one another glued to their Smartphones or in groups of people with one or two people frantically typing away on their phones. Considering that networking continues to be an increasingly important skill, given the tough competition for business opportunities, I was surprised at the apparent lack of interaction.

When I first attended an event of this type, not too long ago, it was stimulating to be surrounded by like-minded individuals who were actually engaging in conversation about the event, publication or simply sharing PR war stories over breakfast. But there has been an interesting shift in networking - or the lack thereof - and I attribute this to the constant connectivity that Smartphones offer. Quite simply, they allow us to be in a room but not actually 'there'.

Walking into a room full of unknown people can sometimes seem daunting and make you want to hide in a corner and spend this valuable time tweeting, Facebooking or emailing away. However, it's important to embrace these situations as networking opportunities can often be missed because of shyness or the refusal to break away from technology.

Another thing that stood out to me at the event was the number of people who were live tweeting from the briefing. Is this now classed as networking? It was great to see people's instant responses throughout the presentation and even the conversations of those engaging with each other, but I wondered whether this distracted from the actual presentation?

Leaving the event I pondered whether the art of networking is dead, or if we are just doing it through different mediums, like social media.

I believe social media still has a long way to go before it can begin to compete with the effectiveness of a face-to-face interaction. Networking is an important - and critical - part of business and we mustn't lose site of the importance of these social interactions. As PR professionals, our jobs depend on our ability to build relationships, be it with clients, journalists, prospects or peers. So for the sake of our industry, I hope the art of networking is not dead!

What do you think? Can live tweeting from an event be classed as networking? Will social networking ever replace face-to-face networking? Or ultimately, do we now live in a world where we are required to be interacting not only with those around us but also with our online networks?

Big Manager Finally Advertises, But Will it Really Change Anything?

SEC Votes to Amend Rules on Marketing by Funds