Kickball, it's not just for kids 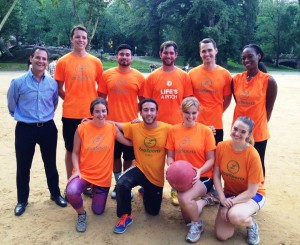 Let's give shout-outs to both the traditional office space and perhaps the less traditional activity that can build camaraderie amongst co-workers–adult league kickball. The proverbial first cousin of the more conventional "office softball team," kickball provides a rare collision of adults with alleged dignity and a playground sport that became dead to the average person upon entering middle school.

The stereotypical image of casual adult leagues for sports such as softball and basketball are fairly homogeneous. But as most people are likely unaware that adult kickball even exists, it seems logical that when pressed, the images of such a sport would fall all over the place. Good news . . . today is the day we lift the lid on this enigmatic sport and reveal the intricacies that make it one of the most intriguing options for workplace bonding. To do that, we will confront kickball's myths and explore its evolution from a common recess activity to the potential destination of the wannabe weekend athlete.

There is no strategy in kickball

Children: Of course there's a strategy. Kick as hard as you can. Run as fast as you can. Catch everything remotely near you.

Adult: Ah, to be young again. There is a painfully clear divide between the teams that have maintained the "children" strategy above and the teams that evolved to make kickball akin to a game of chess. Mainly, the teams with a strategy beat the snot out of those that didn't and it wasn't pretty. The silver lining, what better way to build relationships with co-workers than to take time from your day to discuss kicking lineups and fielding alignments?

No one gets hurt playing kickball

Children: Also false. Any sport that lends itself to short bursts of sprinting with a loose definition of "positions" has the potential for collisions, scraped knees, and kickballs to the face.

It's impossible to be thaaaaat good at kickball

Children: True to an extent. But every class had their 1-3 kids with a year of travel soccer under their belt that could kick high and far enough to inspire fear.

Adult: You'd like to think that there wouldn't be any star players in adult kickball, right? But in similar fashion, almost every team has the former high school/intramural athlete searching for sports-based validation, no matter what the setting. With that in mind, all you can hope for is that your star players are team players and fun to be around (ours were) and that you avoid playing against the ones that peaked early and now use these games as flashbacks to better times (we unfortunately did not).

It's too often that we as a society bury our faces in our work along with our problems, and if we're not careful, we smother ourselves. If for an hour we allow ourselves to play, laugh and be utterly ridiculous, that seems like a pretty good deal. What better way to inspire carefree emotions and turn workplace acquaintances into friends than with a good ol' fashioned game of kickball?