Leadership in the Heat of Battle 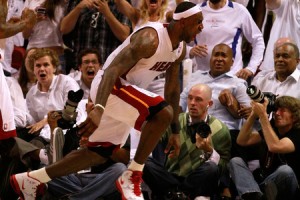 Tonight is the first game of the NBA Finals and guess who couldn’t be more elated that my favorite team will be blazing the courts against the Dallas Mavericks?

Uh-huh, you guessed right.   If you know me, you  know that my team (even pre-Lebron) is the Miami Heat, but after a tough season of inconsistency and downright sloppiness, I’m wondering if that old adage “you’re only as strong as your weakest link,” holds true here.   And that weak link may very well be the leader, coach Erik Spoelstra.

There’s been much ado on the Internet regarding his coaching style and speculation around him being fired and former coach, current president Pat Riley stepping back in, which in my opinion may not be a bad idea.  But what do you think – how do you define leadership?  Well first, if you look at good old Merriam-Webster’s definition it’s “ a person that leads…”  Brilliant.

To me, a leader is someone who has a clear vision and can rally a group of people to work together to achieve that common goal.  The person is passionate, inspirational and people WANT to follow their direction.  As far as I can see Erik Spoelstra is not doing much when it comes to inspiring his players.   These men are talented, they can play, but during the regular season they were struggling  to win games and while they’ve beaten the Bulls (neh-neh-neh-neh-neh!), during the May 15 match-up against the Bulls they were dropping balls and tripping over themselves like middle school girls.

Spoelstra’s leadership traits from my point of view are lackluster at best.   The one key characteristic he’s lacking is confidence.  He seems to be intimidated by his star players allowing them to lead him instead of the other way around.  Listen to him during interviews about game strategy and he fumbles to explain.  As someone who never played in the NBA, can his players ever look up to him and see him as someone they truly want to follow?  The team made it through to the finals against the Dallas Mavericks, but that seems to be attributable to the players’ talent, not Spoelstra's.

Regardless of your team allegiances, what does a leader mean to you and what leadership advice would you give to Spoelstra (devoid of four-letter colorful words) if you had the opportunity?   Oh, and let’s go Heat!

Roundtable: Kim Kardashian is Filing for Divorce. So What, and What's Next?