Looking for a Sweet Groupon Deal? Pay Them to Name Your Baby. 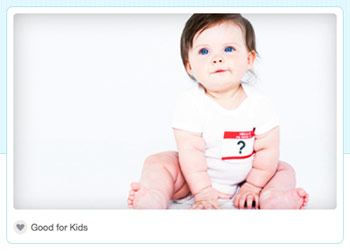 Yes, you read that correctly and no, I'm not being facetious. Groupon, in its continuous and earnest effort to remain highly relevant and slightly amusing has recently posted the deal of the century! All you have to do is fork over that $1,000 you have gathering dust on your nightstand and have an affinity toward the name "Clembough."

Have you, or someone you know, been stressing about how to define your forthcoming bun in the oven? As an avid human with many acquaintances—and, for reasons unbeknownst to me, few friends (shocking, right?!)—I know quite a few proud parents. And despite the fact that these parents pretend not to know me for the sanctity of their children, I have taken note as the all-to0-familiar difficulty they've have in naming their beloved chubby crying machines. It's very difficult to remain trendy with baby names. Look at my name for example; Aaron is boring, shallow and nearly impossible for people to figure out the spelling of when audibly spoken. Yes, my life has been full of many painful trials and tribulations. But back to the matter at hand: What if you, a trendy parent, bestow a name to your child that isn't on this year's trendy baby name list?! I wouldn't want anyone to suffer the unending looks of disdain that every passerby on every street would graciously give a parent who named their children without trends in mind. The pure, unbridled horror makes me shudder.

At this point, I don't need to be psychic to foresee what you're thinking. "This is clearly too good to be true! No one would accept the unprecedented burden to name my little diaper-clad bundle of joy!!!11!!!!!!" Fear not, my dear acquaintance, for Groupon is here to not only name your baby with the once-in-a-lifetime name "Clembough," but to also take your unwanted money. Oh yes, and it's completely legit as per Groupon's own Julie Mossler. Below is the description for this offer as read on Groupon's Website:

A rose by any other name would smell as sweet, but a baby that isn't named by Groupon smells like missed opportunity. Spray your infant with the perfume of success with this Groupon.

All too often, the importance of a child's name takes a backseat to other "needs" such as food, shelter, and clothing. Groupon, the World's Foremost Authority in Baby Naming™, has stepped up to address this issue. Upon your child's birth, Groupon will relieve you of the burden of naming your baby by bestowing a specially selected, custom first name upon your infant son or daughter. Purchasers will e-mail Groupon with their voucher number, and we will e-mail you back with a name for your child based on the name's aesthetic value and for how it might look emblazoned on a trophy one day—for a child named by Groupon will grow tall and proud, and he or she will be a beacon of hope in a world that is in such desperate need of one. Don't settle for non-Groupon-approved names such as Kevin or Bridget—let us gift your sweet child with a moniker for the ages.

Groupon has been naming things since 2008, when it named itself by combining the words “grout” and “superweapon.” Its previous baby-related ventures include Grouspawn and its sponsorship of the all-infant rugby league, Tot Scrum.

Publicity stunt or not, Groupon has received a lot of press for this seemingly random offer. In a world where most users enjoy discounts to restaurants, random electronic goods or even pet products, this change of pace has solicited many a double-take from dwellers of coupon savings. Whether or not this odd but positive wave of news help get Groupon's share price up, however, is something only time will tell.

There is less than a day left to partake in Groupon's naming offer, so don't drag your feet. After all, don't you wish you grew up with the name "Clembough?" (Hmm, on second thought. . .)