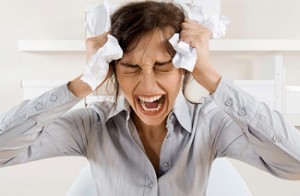 …Right. Many of us have been there. Perhaps you, or someone you know, once upon an office dreary, worked at a company with a boss who was not just a tool, but a tool box. I admit it; I’ve been there. Sure, my perspective is by all means slightly skewed toward a self-sympathizing perspective, I’ll agree to that. But what if it’s not just an experience you as an individual are contending with; what if it's a plague upon your office of cantankerous and universal proportions? (As an aside, I’ve been looking for an excuse to use the word “cantankerous” for about four years and give or take five months.)

According to a recent study (containing over 20 years, 10,000 workers’ opinions and even more impressive stats), nice guys—and gals—really do finish last, at least when it comes to pay scale. It also states that a person's gender plays a role in affecting one’s pay, but unfortunately, that’s not exactly earth-shattering news and has been reported before. Now, as a self-confessed nice guy who opens doors, helps old ladies with their groceries and says please and thank you, I find that this study's results thoroughly dishearten my retirement aspirations. Let's take a closer look: how can we distinguish between nice and not-so-nice people? (For reference sake, nice is defined as “agreeable,” while the opposite is referred to as “disagreeable.")

An excerpt from the report (PDF) offers insight into those who are agreeable and disagreeable:

"One has simply to look to Costa and McCrae’s (1992) six facets of agreeableness—trust, straightforwardness, altruism, compliance, modesty, and tender-mindedness—to get an idea of what an agreeable person is like. But what of people low in agreeableness? Are they antagonistic boors with no concern for their relationships? On the one hand, research on the variability of trait manifestation in behavior (Fleeson & Gallagher, 2009), indicates that, on average, people low in agreeableness are basically amicable. They are just slightly more likely than people high in trait agreeableness to behave disagreeably in certain situations by, for instance, aggressively advocating for their position during conflicts (van de Vliert & Euwema, 2004). On the other hand, high levels of disagreeableness may be associated with psychopathy (Derefinko & Lynam, 2006), suggesting that disagreeable individuals may be predisposed toward antisocial or deviant behaviors (Decuyper, De Pauw, De Fruyt, De Bolle, & De Clercq, 2009). However, most disagreeable individuals are unlikely to suffer from clinical psychological disorders, and as evident in the myriad acts of corporate malfeasance reported in the literature (Balch & Armstrong, 2010), antisocial behaviors do not preclude earning higher incomes."

After reading the above quote from the report, I was almost immediately reminded of a blog post written by a peer discussing mental illness’s affect on leadership, so perhaps we know why these disagreeable people are rewarded over people who are more agreeable. Perhaps they display signs of stronger, more unique leadership? Or perhaps higher-ups were just blind to their glaring, repugnant and toxic flaws? Maybe I’m just bitter? Or maybe I’m just... disagreeable? Ah, the beauty of conversational full-circle tirades.

In my limited experience, I’ve personally witnessed a fair share of people from my past get rewarded without displaying a decent set of ethics, let alone modesty. There have been times when their flaws were known about beforehand and simply ignored. There have been other times when their lack of social skills were seemingly the reasons for their reward or promotion, just to keep others in line and more productive. A devil’s advocate might argue that a disagreeable manager may keep his or her underlings more organized in spite of themselves, mostly because their very presence limits social tomfoolery. However, I’m pretty sure I dislike someone who comes across as argumentative and incompetent. I enjoy an environment that encourages teamwork and companionship (and entrepreneurship!). And furthermore, I think nice is necessary.

So, who makes the better, or more productive, worker—the agreeable or disagreeable employee? What do you think?

Should I Stay or Should I Go?