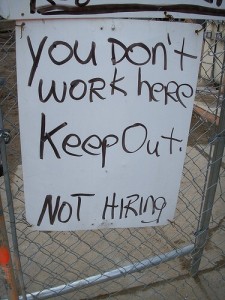 Busy financial news week amid ongoing reports from Libya and Japan, with economic news starting to illustrate a slightly rosier picture as the US unemployment rate slipped to 8.8 percent in March, from 8.9 percent, and non-farm payroll increased by 216,000, giving some support to President Obama as he fights to keep the government from shutting down this week from budget shortfalls.

A new e-soap box called ICorrect will allow those who feel they were inaccurately portrayed or wronged to post their "say"Â for just $1,000 a year. Not exactly virtual WhiteOut, the site allows folks to correct what they believe are misperceptions or misrepresentations or must plan lies, according to a report last week in The New York Times. The site, which was launched about a month ago by Sir David Tang of Shanghai Tang fame, had 225,000 visits its first weekend.  No word yet how names are cleared but hard to believe that the age-old journalism rule -- not to repeat the error in a correction -- will be followed.  Seems more likely to fan untruths but perhaps eventually a PR tool nonetheless in combating inaccurate, pesky claims.

No surprise but worth noting that percentage of folks who get their news online has now surpassed newspapers (but trails TV) for the first time, according to the Project for Excellence in Journalism's annual State of the Media Report, as told online by Jim Romenesko. Also of note but also not surprising, newsroom staffs are 30 percent smaller than 2000.