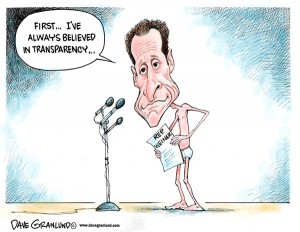 The Week Unpeeled (or Maybe Unzipped)

Not a week of much good or really big news, compared with much of the spring, with non-Weinergate-focus focused on what appears to be a slumping economy sparked by the week jobs report last week for May, concerns about Eurozone health, high domestic debt with no resolution in sight and continued weakness in the housing market.

Really?  This is the next move after essentially playing a flasher on Twitter. Not a very strong PR move after ruining one’s reputation and becoming the laughingstock inside, outside and below the beltway.  News reports last week said the congressman was seeking crisis advice but no one seemed to tell him to think twice about his hand-scrawled apologia on his front door or even asking for the leave (he doesn’t have to ask for one technically) or even just zipping it for a while.  Curious note in a WSJ story Thursday that New York crisis manager can charge $5,000 per month.  Wow! What a deal.  Please don’t look for bargains in crisis management, the “free” advice for the day, Mr. Weiner.

I guess it was bound to happen once WSJ became part of the Murdoch fold, but Friday’s front page looked like it came straight from the tabloid:  Above-the-fold photo of a horse in front of two fans with the header about last week’s heave wave, “Blazing Saddles” and the cutline, “Why the Long Face?”  I did say, I guess, it was not a week for big news. Makes you miss the dot portraits.