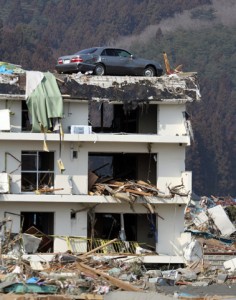 The earthquake that registered a devastating 9.0 on the Richter scale and the ensuing tsunami that is taking an incredible toll on the Northeast coast of Japan have dominated all forms of media over the weekend, with newspapers (via video on online sites) and Twitter getting the early lead of coverage and several outlets appealing to Twitter followers to help with coverage.  The force of new media, a mix of citizen journalism, reality TV, social networks and global communications, kept apace of the force of nature, guaranteeing that all observers were aware of the natural destruction, death toll, science, concerns of radioactive-materials release, proud Japanese culture and economic impact.

As NPR was conducting its pledge drive on the air for "sponsors," the CEO resigned amid a scandal when another NPR executive by the same last name (Schiller, no relation) said on hidden video (compliments of conservative trickster James O'Keefe at a sham dinner to woo potential funders) that, among other things, Tea Party folks were "seriously racist, racist people," that liberals were more intellectual than conservatives and that NPR might be better off without fed money.  Tons of copy on this one for sure as many in the GOP would love to bail on NPR. But maybe one pledge should be that NPR CEOs (quite a few in recent years) should not be so quick to bail.  The inappropriate comments were not made by a journalist or someone on the editorial board but by a senior vice president for the foundation. Not acceptable behavior by Mr. Schiller or Mr. O'Keefe but not a reason to quit.Â

Home is Where the Action Is